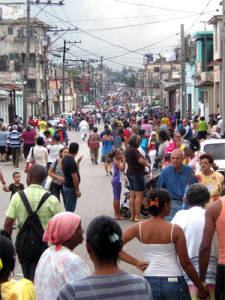 HAVANA TIMES, Jan 4 — I have a picture of my niece on the desktop of my computer. She’s only a year old and a mulata, like me.

What it means to be black in Cuba is summarized by her mother, a light-brown-skinned Cuban woman who would never dream of mentioning the girl’s black grandmother.

Race here can also be encapsulated by my brother’s awareness of the frequency with which the police ask him for his ID when he’s walking down the street.

On the outside, the two of them are a happy couple with a little baby in their arms. They confine themselves to laughing at and repeating the jokes they hear about black people.

I have a friend who has a theory that’s well-founded (at least according to him) which maintains there’s no racism in Cuba. Being a good person, I think what he should say is that there shouldn’t be any racism in Cuba.

If that was the case I could agree with him and this subject wouldn’t produce a disconnect in our relations.

Certainly, whoever heard or read what was said recently in Cuba’s legislature on the subject of race started off this year with the same idea.

“In Cuba, there is no racism.” Please! Is this really such a paradise?

Evidently there is no historic Old Havana rebuilt like in the days of blanqueamiento (“whitening,” the recruitment of whites to the island to keep it from being majority black).

There is no legacy of slavery, pain or a white heritage of human trafficking.

There are no prisons full of black men and women, just as there is no 500-year debt of social disadvantage.

And obviously rumba, guaguanco, Santeria, palo, the Abakua, or conga have never been considered marginal or marginalized manifestations of “folklore.”

Well that’s nice. This is the place. Come to the paradise where there’s no color and — incidentally — no legacy!

What I’m saying is that my family and friends and their jokes and theories are big lies.

It’s was a lie when Alfredo was told by the barber that he didn’t cut “that type of hair.”

It was a lie when Julian didn’t get the job (though fully qualified) and later found out that it was given to a less qualified white man.

It’s the same when Karen, who works in a museum, is constantly admonished by her boss (with all the power that goes with that status) because he thinks her hair is “horrendous” and inappropriate for her work as an attendant.

Now we find the National Assembly didn’t see it necessary to pass a law or resolution pertaining to racism. They saw no need to accuse those who — from their positions of power, whatever these may be — denigrate, exclude and apply their racist ideas.

I think that all these stories of my family and friends are mere fantasy. Certainly, they’re as imaginative as I am.

In any case, my niece will grow up facing the same discrimination that I did.

Meanwhile my friend, “the good person,” will continue hanging on to his same ideas, and the rest of us, for those who care, will continue struggling.

For my niece to grow up in a truly civil society of the 21st century, it would be necessary — now that they’re “updating” things — for them to pass a law that recognizes and orders racism to be treated as a crime.

5 thoughts on “No Law, No Resolution, No Racism in Cuba”