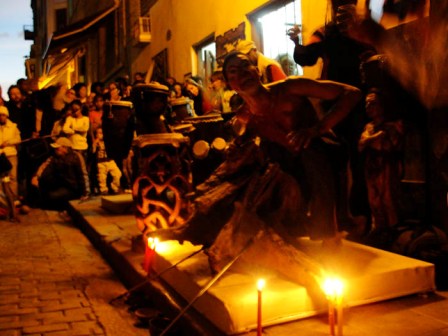 Since a little over a month ago, I’ve been learning how to camouflage myself; I didn’t want to write.  Around me was death and hunger, more than what was printed in the papers.

There was enormous expectation, with people thinking that perhaps there would be some changes on this island; there were also firings, which portended other more painful ones to come.

Meanwhile, some people discovered on TV that racism existed in Cuba; and others (with more power to decide than those viewers) recognized this after a group of US African-Americans forced them to take notice.  For that fact —from behind the screen that deceives fools— they declared their innocence.

Therefore the efforts of Cuban black intellectuality have been in vain.  Up to now, speaking of blacks, only takes place at anthropological events – as if we were still some exotic species “discovered” by Marco Pole or who knows who.

The fact is that even in these scientific forums, if it’s a black who gives statistics demonstrating prejudice or racial discrimination still exist —covertly or openly— she or he is the one labeled racist.  For the time being, it’s better to take advantage of the coverage, to the extent they allow us to.

Another thorn in my conscious is the screaming of an abused woman near my house. I don’t know how to deal with the situation, because I’ll get the same response as always:  “In a matter between a husband and a wife; no one should get involved…”  It’s the same response, I’m sure, she’ll receive the day she decides to report it to the police.

In Cuba, like in a good part of the world (yes, I know), laws protecting women from their husbands don’t exist.

I also wanted to write about the “Orishas” (deities of the Afro-Cuban pantheon) but I didn’t dare.  Then I would have had to go into the particulars, or better said, the ones I’m now aware of.  I believe this is a dairy that I owe to myself and that I owe to them.

Though the news only talks about Haiti, as if saying to us, “Shut up and take it – there’s always somebody worse off than you,” I can’t take any more.  The result of my silence has been disastrous.

It could be that I have selfish reasons: I don’t think it will change the world, I don’t think many people read me, nor that I’m doing everything I should.  But I’ve got to get beyond my depression.  What’s more, those who follow me (the living and the dead) wouldn’t forgive me if I decided not to write again.

2 thoughts on “They Wouldn’t Forgive Me”