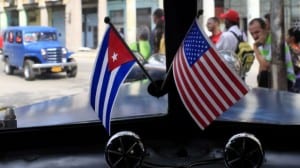 HAVANA TIMES — I’ve been feeling strange and even confused for months, as though I were undertaking a journey to the unknown.

I grew up believing the story one couldn’t trust the United States, that there was nothing of any value there, that everything that came from up north was a lie.

It’s not that I like to cling to things, much less see “enemies” everywhere. But it’s hard to change one’s way of thinking entirely overnight.

You also can’t expect to make friends in a single day. You first need to get to know a person, and something deeper comes later.

However, we’ve quickly gone from hating to being friends with the Empira. They’re no longer “so bad.”

I recall the days back in school when we used to sing offensive things about the US president in office. There were many options to choose from. We could say they didn’t bathe or insult their mothers.

To mend one’s ways is a wise thing, some might say, and it’s true. We’re all entitled to do this, and, if those who make the decisions have already taken the first steps, then I welcome these new relations. I hope the changes will be positive for many split-up families, such as mine.

The US embassy in Havana is already a fact. Politics is often hard to understand, particularly because those involved in politics are human beings, and who does not make mistakes?

Now, we just have to wait for the blockade to be lifted and for all restrictions on trade with the world to be lifted, for families to be reunited and overcome their distances and resentment. Then, everything will be normal again.

My father and one of my sisters live there, but, for my son, they are like ghosts. He’s only seen them in photos and knows about them through letters. I’m getting on in years and I would like for him to meet them. We have to set our differences aside to be a little bit happier.

I imagine we all stand to win from these changes, not just the country, but people also. I am confident I will soon hear from my father and, though he is old and ill, I will be able to have the relationship I lost because of…life’s turns.

14 thoughts on “Cuba – US Relations: A Trip to the Unknown”