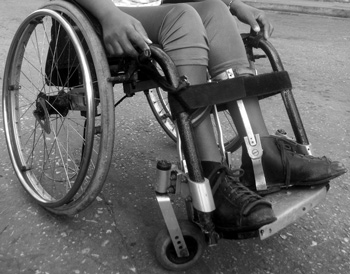 HAVANA TIMES — Who doesn’t enjoy getting a gift? I don’t think that’s a difficult question. If that gift is something that changes your life, it is far more welcome.

Things become complicated when one is responsible for distributing limited donations to a group of desperate people in need. I found myself in such a situation a few months ago, when I had to distribute 24 wheelchairs among people with disabilities in my neighborhood.

There are many people with motor disabilities in Marianao who are members of the Cuban Association for the Physically Impaired (ACLIFIM). The number of wheelchairs donated didn’t even cover 50 percent of the neighborhood’s needs, and we were forced to prioritize individuals on the basis of their disability.

Of course, those with more severe challenges, such as double amputees, paraplegics and people with medullar lesions, were our top priority. My heart broke when I had to hand out the wheelchairs: I had to send away many who came to me, people who have elderly parents with disabilities at home, because they were not ACLIFIM members.

I was also made monetary offers. The figures were high, but I turned them down. The wheelchairs were being sold at 77 Cuban pesos, and some people offered me as much as 80 Cuban Convertible Pesos (CUC), almost 25 times the price.

I tried to be fair, though it was difficult to choose who got one and who had to continue waiting for another donation. What fills me with pride is remembering the joy of those we gave back their legs to, metaphorically speaking.

I am confident I will be able to continue helping those who need help, even if I am not paid for doing this job. I wouldn’t trade sincere gratefulness for any amount of money.

I have always believed that positive energy makes things flow better. The job I do forces me to move long distances across the neighborhood every day. A few days ago, I also got a gift: I was given an electric wheelchair, without any batteries or a transformer (because, according to the association, that is how the donations are received). I am grateful they thought about me and I know it will make my life a lot easier when I manage to get it up and running.