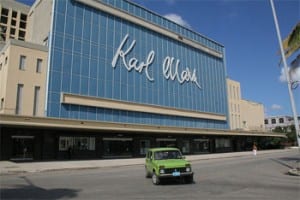 HAVANA TIMES — After painstakingly arriving at Havana’s Karl Marx Theater with the aid of my son, I was able to buy tickets for a show that had been announced on television. There were many other people wanting to get tickets as well, as is often the case with comedy shows, but people with disabilities have priority and get half off admittance.

I headed home with high hopes, thinking I’d have a bit of distraction and fun in a few days’ time. We had planned every detail and the moment had arrived. My son was extremely happy, as we almost never go see comedy shows and he loves to laugh.

As we couldn’t take a collective cab because these don’t want to carry wheelchairs, we had to rely on public transportation. We left willing to face all obstacles leaving 3 hours in advance. With time on our favor, we thought we’d avoid anything unexpected from delaying us.

We sat to wait for the bus and pray it wouldn’t be too full, so as to be able to board and accommodate my wheelchair inside without bothering others too much. Even though that particular bus isn’t very reliable, it arrived about fifteen minutes later and half empty. Great, everything was smooth sailing!

However, a few stops later, it stopped and the few people sitting inside began to get off. Finding this strange, we found out what was going on. We found out the bus had limited circulation, which is to say, it was stopping well before its final destination.

Knowing we were half the way there, we decided to wait for the next bus.

Little by little, our hopes began to wane. That “other” bus never arrived. All the buses that came were stopping ahead of the final destination.

What promised to be a happy night vanished as if by magic. We waited for nearly four hours, in vain, only to return home, sad, having lost our money and a Saturday evening, waiting for a ghost bus.

2 thoughts on “Havana’s Ghost Buses: The Joke was on Us”