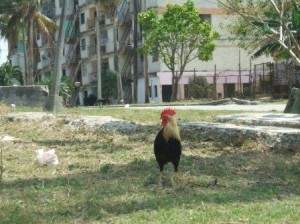 It was the 3:00 in the morning, and I had decided sleep over at my mother’s house, in the Cojimar neighborhood. I stayed up watching TV until even later. So when I heard a noise in the backyard, I jumped up quickly.

A yell, a squawk, and then a bang, that’s all that was heard. Despite the speed which we made it to the back — my mother and her husband had already woken up — the thieves were no longer there, nor was the rooster in its cage.

The bird had been almost like a pet to my mother. She had kept it for five years, so after all that time it was no longer a tempting dish for anybody. That’s why we suspect that they wanted it for bujeria (occultism).

When checking around the exact spot of the theft, my step-father discovered that the thieves, in such a hurry, had both left their baseball caps. This led us to think they had no way out.

Episodes of the crime series CSI immediately came to my mind, as well as its local equivalent Tras la huella, where strikingly attractive police officers come up with the most amazing strategies to apprehend the masterminds behind almost perfect crimes.

Unfortunately, the reality was disappointing. We reported the incident to the police and they showed up with their “canine brigade,” a lone dog that lost the trace and didn’t come up with anything. Not only did the scent lead nowhere, so did a hair that the investigation unit said they found in one of the caps.

The case remains on file, but it was only a rooster, and perhaps it wound up satisfying the hunger of some family in need. What’s more, in the eyes of the police the bird didn’t have too much protection because only a flimsy fence separated it from the public’s temptation.

These brief notes should be understandable by a foreign Anglophone public, a Spaniard, a Colombian or a Cuban. But to ensure this, a paragraph giving the context is vital.