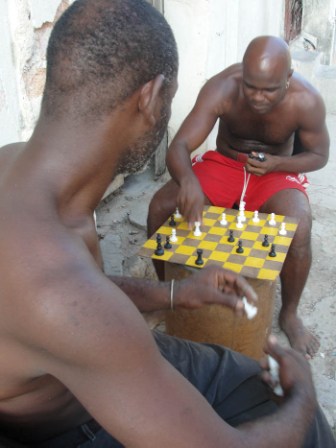 “In the Footsteps of Che Guevara” is an annual chess tournament held between different ministries and agencies of the State.  We are now holding the competition for the second time; the first one took place last year, when our team from the Cuban Book Institute placed 27th out of the 34 teams participating.

This may seem like a poor showing, but that’s not the case.  You have to consider that our team —of which I’m the captain— is made up of workers who are not professionally dedicated to this game; however, most of the other squads are made up of professional players who don’t belong to the companies they represent.

Yesterday, the first day of the tournament, we lost 5-0 to a club unknown to us. It was logical that this occurred, since our players were not trained for that level.

With 58 teams participating this year, our chances are even more remote.  This is because —in addition to our inferior quality— we have not received support from our management.

Other teams are provided transportation to shuttle them to and from their homes for each game, which begin at 5:30 p.m. and end at 8:00.  We, however, have to depend on public transportation.  Some line-ups are ensured a little something to eat, but not us.  Others are given free time to prepare, but not us.  The result is that none is us really play that well.

Last year, upon the conclusion of the first annual “In the Footsteps of Che” competition, I designed a project to promote chess in our organization with an institute-wide tournament.  The purpose was to attract good players in our branch offices, of which there are several in the capital and across the country.  Notwithstanding, the initiative was not supported by the union and much less by our management.

“Sure,” the union rep told me, “nothing can work well under the conditions of chaos in which the institute finds itself.”  That’s true.  We don’t have a president, and there are many other administrative posts that lie vacant.

Cuban school children mechanically repeat the motto taught to them: “We will be like Che.” Now we’re part of a tournament that marches “in his footprints.” So I wonder: Is the lack of organization and support an element of the footsteps of Che?  Though he had his defects —like any other human being— I’m sure that if he directed our institution, he would give us more support; after all, he loved this sport and was a person of ideas.

Those of us on our team also love chess, that’s why we’ll try to do our very best possible. Nonetheless, I’m convinced that our performance will be horrendous: it will reflect the conditions in which we find ourselves, like the Egyptian pyramids reflected the might of the ancient Pharaohs, or like the decline of Cuban sports quality reflects the situation in the country.