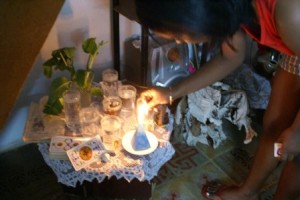 HAVANA TIMES — Everyone needs spiritual strength for encouragement when things seems to be moving in the wrong direction. Religions, myths and even magic have always played an important role in this regard.

In my case, I’m an atheist. I could say that this is by choice, but that wouldn’t be entirely honest. Nobody really believes or disbelieves by choice, that’s to say by free choice. I’m an atheist simply because my family is, and so that’s how I was brought up.

At this point though, with regard to the supposed “atheism” of my close relatives, the jury’s still out. Hidden or tucked away in corners of the house, I’ve found their candles, coconuts, necklaces, amulets and glasses of water.

All of those are items for communicating with deities, according to Afro-Cuban beliefs. I began discovering these things back in the 1990s – first with scorn and later with a certain degree of disappointment.

After a while I began to understand my family a little better. The problem is that you can’t always go around acting according to what you feel. In the ‘80s, religious beliefs weren’t welcomed by most people here.

With the crisis and the “openings” or reforms of ‘90s, everyone who wanted to could start or resume religious practices. My family dusted off some of their effigies of saints they had stored away for decades.

Others simply began practicing with more pride, because they had never abandoned their orishas (saints). Those born in this new era had the option of being educated or not in these or other belief systems.

Nonetheless, there was a certain number of people (possibly a whole generation, including myself) who didn’t have any saints to dust off but who were by then too old to embrace any new doctrine. Some, however, did in fact choose a religion.