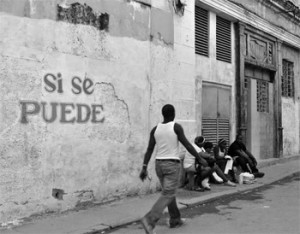 HAVANA TIMES — “What I’ve achieved in life I owe to my being a dreamer,” said Rodrigo. This was during one of those afternoons when it’s better to daydream than to deal with the harsh reality of a bus that never shows up or an empty refrigerator waiting for you at home.

If life is about daydreaming, no one surpasses Rodrigo. Right now, with hardly a penny in his pocket, he’s telling me that he has a chance to “even buy a car.” I just smile.

Of course, my friend’s seemingly excessive optimism isn’t unfounded. After a first stage of his life that ended when he arrived in Havana as an immigrant from his native province of Camagüey, luck seems to have smiled on him – or it’s rewarding him, if you will, for his perseverance as a dreamer.

Starting out here was tough for him. With no fixed address, no job and homeless, he survived the first few months thanks to a girlfriend who he hooked up with almost as soon as he got here – secretively staying with her in her dorm room.

Here in Havana he only had one friend, thanks to who he met Ivan, a young man who was able to give Rodrigo a home address and a job at a casa de cultura (community arts center).

At his new job he ran into another guy who offered to sell him a house in Old Havana for only 2000 CUCs (about $2,200 USD). While it wasn’t in the best of condition, it wasn’t bad for that price and Rodrigo’s precarious status.

On top of that, the seller had managed to find someone willing to pay 1,000 CUCs for the right to build another unit on top of Rodrigo’s. If things work out like that, my friend will only have to pay 1,000 CUC in all, which he’ll be able to pay off in installments.

Rodrigo could move into that house and stop paying 40 CUCs in monthly rent. With those same payments, in two and a half years he will have paid the price of his “new” house.

Rodrigo, who’s a writer, talked to me about the possibility of winning a literary competition and using the cash prize to buy a better home. This was how he was able to consider the possibility of even buying a car. Again, I looked at him and smiled.

I only said to him that in his case it’s not only a question of dreaming, but of also having the luck that not everyone has in Havana.

One thought on “Rodrigo’s Luck”