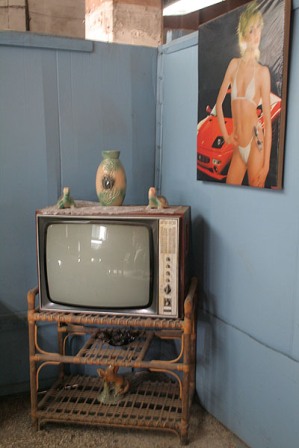 While the dentist examined my molars, she chatted with her assistant about the current Cuban TV soap opera.

“Young people today are worse off now than in my times.  Now they deal with everything with knife stabs and bottles over the head.  Nobody wants to talk things out these days.  Did you see last night’s episode of the TV soap opera?  It was a realistic reflection of what’s happening, but it’s not educating anybody.  All they’re doing is encouraging even more bad behavior,” she said.

“Yeah,” continued the assistant, “the guy told his partner to always be “saddled up” (to carry a knife), and the girlfriend was cheating on him with anybody who showed up. You’re going to see; this is going to end up bad.”

“By the way, did you see what they put on this morning?  Now that was really good,” commented the assistant.

I sat there thinking to myself: Young people have always been the same, with their virtues and defects, with passion and the ideals necessary to make societies advance, with their malleability that makes them conducive to change, and their inexperience that allows them to make understandable mistakes.  That’s the way they’ve always been, and that’s the way they are today.

I also gave my different opinion on the TV soap opera.  Their way of thinking is not isolated, but it lacks objectivity.  In my opinion, Cuban television has the most instructive and educational programming of the few examples with which I’m familiar.  It’s not governed by market forces, but by politics and ideology, which —while not altogether good— does have its advantages, and that of its educational value is one to them.

“Ma’am,” I interjected, “it’s our job to explain to our children that what they put on TV is not to promote the moral degradation of youth, but for them to become viewers who critically assess our reality.  Those are warning shots so that what we believe is wrong doesn’t continue to happen.  If there’s anything not lacking in our TV soaps it’s a “moral to the story” whereby each character suffers the consequences of their wrongdoings.”

This is a good Cuban TV soap that deals with many problematic facets of our society.  It promotes positive values and points to healthy paths to follow.  It comes on at 9:15 at night, the established schedule for adult viewers.  We’re the ones being irresponsible if we let our children watch television when they should be studying.  But if they see it, it’s our task to prepare them by interpreting the messages.  Of course to do this, we will first need to prepare ourselves.

I find it shocking that some people prefer another TV soap, Hombres de Honor (Men of Honor), from Argentina that —while quite entertaining— relies on the same worn-out springs of its romantic predecessors.

Of course I couldn’t tell her all that with my mouth full of metal instruments.  But even if that had been possible, it would have been better not to put to the dentist in a bad mood.