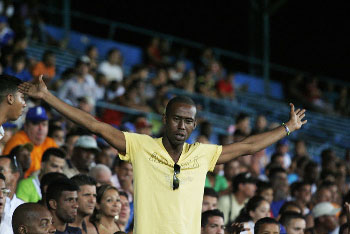 HAVANA TIMES — To say “Cuba”, I dare state without fear of contradiction, is to say “baseball”. The sport runs in the very veins of the country, and no sooner has the National Baseball Season started than the whole island seems to transform itself into a giant bat, ready to hit the ball hard.

No one denies that baseball has become an important part of Cuban culture, that nearly all Cubans are fairly knowledgeable about their national sport. However, is it also true that, as we hear, “Cuba has eleven million baseball team managers”?

To say that the eleven million Cubans who make up the island’s population are baseball managers is a playful way of stating that all of us know enough about the sport to take a crack at managing any team, that all of our opinions regarding decisive baseball-related issues are well-informed and worthy of consideration.

I know this is only a metaphorical way of speaking, that one shouldn’t take the phrase literally, but, even so, I think it worthwhile to point out that this is closer to a myth than a reality. That’s to say, the great majority of Cubans do not know as much about baseball as they say.

We don’t know enough about the sport, for instance, to be able to question the selection of members of Cuba’s national team. Many factors are considered before such decisions are made and, save in rare circumstances, when a player is chosen over another, it is with good -or at least understandable – reason.

This, however, doesn’t stop us from criticizing managers whose teams do not win an international game, or from feeling entitled to question the choices they make to put together these teams.

There are technical, psychological and ethical factors that have a decisive say in the chemistry of a given team. Team chemistry isn’t a concept much considered in Cuba, for the regionalism that characterizes its baseball league makes it next to impossible for managers to freely choose the players they wish to train.

Of course, everyone is entitled to their opinion, as much about baseball as about politics. And it is altogether positive to have these kinds of polemics, which ultimately favor the sport, our knowledge and the enjoyment of aficionados.

It is therefore understandable that the media, government and journalists should encourage discussions about baseball, a sport which is intimately linked to several aspects of Cuba’s identity and ideology – and that phrases such as “Cuba has eleven million baseball managers” or “the umpires are on the stands”, or “the eleventh player is the spectator”, should continue to sustain the myth, deliberately or unwittingly.

But we should take such things with a grain of salt because, folks, we just don’t know that much. You, who criticize manager Victor Mesa’s decisions so confidently, are ultimately passing judgment on things you don’t know enough about. You don’t look the players in the eyes from the team bench, you don’t watch them train every day. You simply don’t know the players. A team is more than its player statistics.

And we, who poke fun at the less successful teams in the Cuban Baseball League, do we really think we could do better than them?