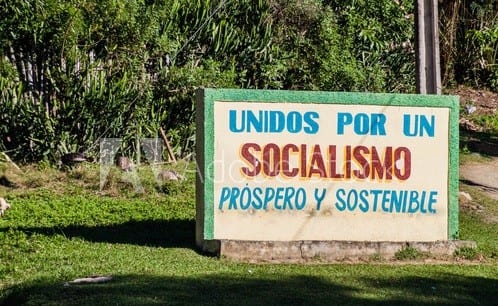 HAVANA TIMES – Ever since Raul Castro formally came into office in 2008, his slogan was “Towards a prosperous and sustainable socialism”. A lot more encouraging, given the circumstances, than what Fidel used to promote: “resist, resist and resist”.

Diaz-Canel doesn’t have his own slogan. He is still upholding Raul’s and seems to sincerely believe that he will be successful in achieving this. At least that’s the message he wants to transmit on TV during his days at the Council of Ministers, saying that we now have to do what we haven’t been able to achieve in the past 60 years.

In order to convince those who have put him where he is, he says over and over again: “we are continuity, we are continuity”. However, the truth is that the new President “appointed” by the Communist Party is working in a lot more adverse situation that his predecessors.

After ten years of superficial changes and a meek opening of the private sector, he is obligated to uphold the nationalized, centralized and bureaucratic economic system that has sunk the country into misery. Because if he dares try something new, the same person who put him in this position [Raul Castro], can just as easily take it away from him. If he does have refreshing ideas, they’ll need to wait.

Under such circumstances, there is less and less socialism in Cuba as the days pass by. In terms of social benefits because the political and economic systems are anything but socialist. The prosperity we’ve been promised is almost a joke. Wealth seems to be the enemy of our economic system, not poverty. And, poverty and migration seem to be the only two things that are sustainable.

There is no doubt that the Communist Party’s main plan is to stay in power, no matter what the cost. It isn’t patriotic or nationalistic, it’s biased and sectarian. Fidel felt he needed to keep the vast majority of the Cuban people in a trance in order to do this. Raul proved that you don’t need everyone’s support, not even the majority’s. You just need a small percentage when you have the repressive forces to control society. Especially the political police who are called “State Security”, whose actions are well and above the Constitution and national laws, so they can deal with any act of dissidence.

We don’t have anywhere to go to demand our few rights because the judicial system doesn’t have jurisdiction over repressive forces and is dominated by the political police.  In three simple words: they follow orders. Anyone can be taken to trial for whatever they want and the only thing that kind of holds them back is the country’s international image and the popular ability to make complaints, thanks to growing, yet limited, Internet access.

They have the safeguard of a political system designed to keep them in power, which in hand with their almost monopoly control of national media, make the perfect combination for social manipulation and control. So, they are imposing a political and economic system that ensures the totalitarian control that the PCC has grown accustomed to. Which it doesn’t want to give up, at the expense of giving up on progress and basic human rights.

The worst thing is that the Communists in power are a minority group in our society. I’d venture a guess and say approximately 10% of the adult population. With the exception of a few dissidents who have openly declared their stance, the rest either cooperate with the regime out of convenience or tolerate it because they depend on it and are afraid. Not fear of the physical torture that crude right-wing dictatorships inflict, but of things much worse, more refined, that play with your mind and cause panic.

As a result, we have a great paradox here in Cuba: Communists are a minority and they lost the people’s hearts a long time ago, but they hold absolute control of the threads of national politics, the economy, the armed and repressive forces. That is to say, they aren’t representative, but we are being controlled and are in chains, without the sovereign power to free ourselves of them or choose another path.

Their objective of improving things by 2030 might as well be moved to 2130, they won’t be able to achieve anything then either. They won’t find a way to move the country forwards towards progress even in a thousand years with today’s political and economic system. The slogan of “a prosperous and sustainable socialism” is also a lie, something impossible to achieve without first making profound changes in our society, starting off with the promotion of a democracy, economic freedoms and human rights.

The ideal thing would be to wipe them out as if by magic and for other, more skilled, political groups to take provisional power and encourage this change. However, ideal things don’t exist or are very rare. The Communist Party will never take a step back because of a sudden bout of patriotis, nor is it easy to draw it out of them. Truth be told, they hold all the country’s power and they can delay the democratic solution for a long time.

That’s why we have to plant our feet firmly on the ground and be ready to negotiate. Putting forward an Action Plan for Change that is democratic and also feasible. Which must include the Communist Party whether we like ir or not, just as much as rejecting it is hard and accepting it represents a starting point towards a new future, a fairer future, for every sector in society.

There are many examples of democratic transitions in History and the only way to get out of a totalitarian system is to place a lot of pressure, but to also give way at the same time, so you can reach a mutual agreement, for the sake of moving towards a democracy. Which we know doesn’t come from a coup d’etat, but from slowly building democracy with intelligence and tolerance.