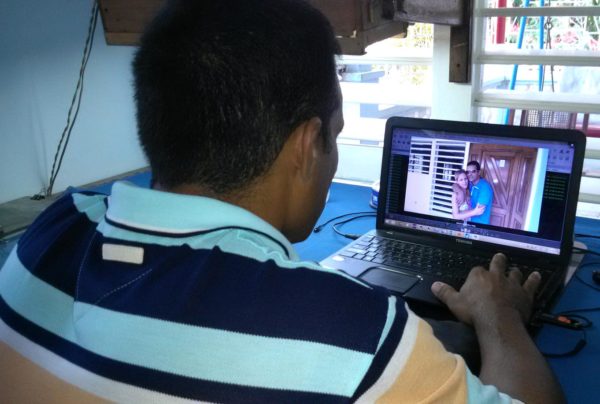 But “fighting” doesn’t mean violence, NO. It means doing something, not sitting still, taking part, not settling, not closing our eyes to public affairs and only thinking about our personal business as a refuge; not thinking that it’s somebody else’s job to bring about change, but our own.

The Cuban Communist Party’s authoritarian system needs us to be obedient in order to stay in power, it needs us to be afraid, for us to believe that we can’t do anything and it treats us as our own enemy, the sovereign people we are. It’s a paradox for sure, but it works. It’s an excellent way to hold onto power and it’s based on social control, not on freedom or democracy. These are the government’s weapons against any change, including progresive change, and they are very effective.

Yet, there is one “weapon” that stands out among the rest: fear. In reality, shaking this fear that’s been instilled in us needs to be lot easier, deactivating this bomb of cerebral cowardice, so we can fight against bullets like they themselves did or emigrate, putting our lives on the line, like so many millions of fellow Cubans have. It isn’t impossible, but you need to be aware of what’s going on in order to do this.

And what would we gain?

First of all, the ability to practise our sovereignty, that has been usurped by the Communists. The Cuban people need to be electing their leaders, not an exclusive political party who believes it is the working class vanguard when it doesn’t even represent the working class; it just uses them in the political sphere and exploits them with low wages. Because if they really wanted a fairer world, they would start off by giving the Cuban people their sovereignty back.

The idea of pushing for laws and even constitutional amendments taking advantage of the law (nominal up until now), which the Cuban Constitution allows us to, is an initiative that might not only gain us ground in a legal sense so that we can move towards a better democracy, but it would also be good civic practise for the population.

Some ideas for laws that need to be pushed:

There might be hundreds of initiatives, but wouldn’t pushing for something that leaves an escape valve for the adversary be wiser than trying to crush them no matter what the cost? For example, the abrupt elimination of the political system, overthrowing the government and free elections, or a political party law.

If we take this as our starting point, then we’ll die on the shore as we push our boat out to water. We need to push for laws that would make the Parliament and government look terrible in the public eye, especially damaging international opinion, which is what they really care about.

It’s a win-win situation for every side because the Communists need change, but they don’t have the courage to go after it. If we give them a good reason and pressure them a little, they might give in and also gain something along with the Cuban people. If we don’t get gain anything, we will always win in other aspects: our people’s civic culture, unity, political maturity.

Of course, it would be a tough battle to fight. Even though it would be legal for us to use these constitutional means, the government will criminalize anything they can that weakens them, unleashing all of their repressive force. However, it’s not impossible if we have perseverance, if we do it without hate, with restraint and only encouraging civic spirit.

It’s an easier battle than the one the US is waging, trying to convince our people that we can bear and need to sacrifice and suffer hunger and other growing needs indefinitely, until the government gives in. A government that loads the plate with pressure and adversity prompted by what they call “the Empire”.

I also believe that it would be a great mistake for us to politicize any initiative to push for a law. If we just want to abide by the Constitution and win back every Cuban’s rights, regardless of ideology, then it’s better to focus it as a civil society struggle. It would be more “comfortable” for people who depend on the State and are victims of social control, to join this movement.

If the Constitution says that the socialist nature of our country is irrevocable, let’s leave it at that. We don’t need to mention capitalism or socialism to push for a law. Names are just irrelevant in the end, rights and the freedoms we earn are what’s most important, and some people will spur on others and so on, until we “conquer all Justice”, like Marti himself dreamed. This is just one of the many initiatives we could have.