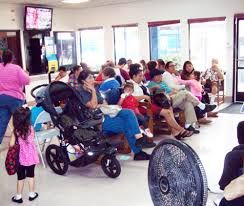 HAVANA TIMES — A close friend of mine told me that her little girl was told she had to go for a urine culture. The doctor at the family clinic ordered the procedure and my friend confidently went to the pediatrician so they could run the test on her daughter.

When she got there, the doctor on call told her that they only did this kind of exam on children who were hopitalized at the center. Puzzled, which is understandable, she decided to go to the town’s general hospital, where they told her they couldn’t do the test either and went on to explain that the results of these tests are different for children and adults and so she should go to the pediatrician…

Another baby also arrived at the pediatric center who was suffering from a high fever and wasn’t feeling well at all. The doctor on call examined the child and deduced that it might be a case of dengue. That person had to take their child to another hospital, where they receive and treat dengue cases. Let me tell you that after a more extensive analysis of the child’s condition, the doctor at the second hospital diagnosed a acute lung infection…

And there are an infinite number of examples just like this. The truth of the matter is that a “trip” to the pediatric hospital becomes a living hell, sometimes even worse that the initial illness that makes us go there.

Imagine having to take your child to the doctors and that when you get there, after waiting in a long line, finally, a health professional “superficially” examines your child in the consultation room. A doctor who doesn’t take his/her time to really understand the root cause for your child’s illness, that because of so and so symptoms, gives a mistaken diagnosis.

Who suffers the consequences?

When I say the pediatric hospital, I imply other health centers too. A lot of them share the same problem. What do you call it? Work done badly? A lack of interest, sensitivity, responsibility, resources? I don’t know, sometimes I give myself a real headache trying to understand why these kinds of things happen. Then I remember that similar cases exist in other aspects of society and I can’t stop thinking and realizing: everything stems from the same source.

Because when things are seriously lacking and you have to fight real hard just to get basic and essential items for everyday life, it’s normal that people get tired and worn out, that they slowly become disinterested and a whole range of antisocial and antihuman values rear their ugly heads and lead us to cause harm to one another.

However, I don’t mean to criticize the work of doctors in this piece exactly, at least not explicitly. Just like there are people who don’t take care in their jobs, there are others who dedicate themselves body and soul to doing their jobs well. To be fair, we also have to recognize that these people, without caring about their financial situation, etc. do their jobs well without hurting their fellow citizens. Similarly, many people don’t let themselves be wrapped up in everyday problems and try to treat whoever comes their way in the kindest way possible.

My intention, therefore, and it’s worth repeating, is to reflect upon and not judge these people. I don’t have the right to judge. All I’m trying to say is that if we all, or nearly all of us, are in the same boat, why can’t we respect and help each other on a day to day basis? Why do we let ourselves be carried away by the worst of our situation? Let us not be consumed by the loss of ethics, morals, sensitivity and humanity!

5 thoughts on “In Cuba: Nobody’s to Blame or Are They?”