HAVANA TIMES – I live in Puerta de Golpe, Pinar del Rio, as you will have read in my other articles. The town is located 15 km to the east of the provincial capital. It is a kilometer and a half long, one narrow street with very few alleyways and banks that join the main street. I wasn’t raised here and I’ve never felt like I belonged here. It has accompanied me rather, so to speak.

I was born in an idyllic and beautiful place called Rio Hondo, officially known as Barrio Jagua, at km 101 on the Central Highway. Although, to tell you the truth, it’s a been a long time since I’ve felt like I belong anywhere. I have this strange feeling of not belonging to a certain place.

But getting back to Puerta de Golpe, it’s more the place where I go to spend the night. My life, my dreams, everything… takes place in the city of Pinar del Rio. Now, with this crazy Coronavirus situation, I find myself forced to spend more time in this small town, which continues to haunt me in spite of everything. I have been spending the other part of my time in Entronque de San Diego for some time now, which reminds me of my childhood.

It has very peculiar origins. It just so happens that at the turn of the 20th century, there was a rustic gate tied to a rope with a heavy object at the old La Mariquilla ranch, which forced it to be shut. When somebody went inside, it would make a loud banging noise when closing, and that’s where the town’s name came from. There was a small tavern in the small village and when day-workers came to eat lunch, they would say:

And the name stuck.

It has approximately 7900 inhabitants and is a farming region, mostly tobacco-farming. To give you an idea, Consolacion del Sur (the municipality it belongs to) is the largest in terms of production volume in the entire province and country, and Puerta de Golpe is one of the most productive areas for tobacco farming, along with Pilotos. So, we’re talking about one of the areas that cultivates the most tobacco in the entire world. 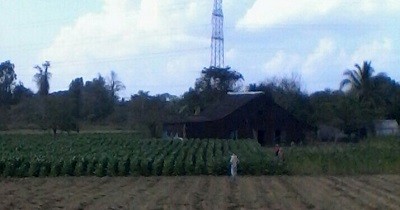 It also has metallurgical workshops in the center of town, known as La Fundicion, with all of the environmental damage it causes. Spending the afternoon in front of this industry is quite a challenge for your lungs and nose.

Luckily (or unfortunately), smelting and the manufacture of farming tools is frequently shut down because of a constant shortage of raw materials. Workers are then often sent to do farm work.

There aren’t many sources of employment here, mainly at La Fundicion, or working as tobacco preparers or farmers growing tobacco and some root vegetables.

Like Mendoza, there isn’t a lot of life here either. Just like pretty much any small town in the country’s interior, it’s really hard to satisfy all of your basic needs, which is even harder nowadays with the pandemic.

There is only one cultural space but it is renowned nationwide: El patio de Pelegrin, a community project founded and run by the famous painter Mario Pelegrin. Painting, sewing and Cuban crochet workshops are held there. Dancing parties are held in the night. It’s basically the only interesting cultural spot in this town, but like every good thing in Cuba, it has long low points.

However, it’s not all bad. It’s a land of great writers such as Heberto Padilla, who was born here and is one of the best Cuban poets to ever have lived and was unfortunately repressed during that grim period known as the Five Gray Years (1971-1976). Rodolfo Duarte, the 2013 Carpentier prize winner for best fiction and winner of other important international literary awards, is also from here.

And it’s an oasis in terms of water, which is the second most important thing for our bodies after oxygen.

However, in the general scheme of things, Puerta de Golpe continues to be in debt with its residents, maybe this is where a vulgar quatrain comes from, many years ago, which sums this up and is always in the hit parade on Puerta de Golpe’s underground scene: