HAVANA TIMES – The new year is just around the corner and things here are only getting worse. The motor at the electrical plant, which supplies the town of Puerta de Golpe and other areas, has burnt out, like a curse. This is the second time it has happened this year, and it hadn’t happened in a decade before that.

People are getting desperate again and having to carry buckets of water. Nobody has a well, unfortunately. The only place where people are able to get water is the Empresa de Talleres, known as “La Fundicion”. It has a huge, raised tank where people are allowed to collect water in extreme cases like this one.

However, as the town is over a kilometer wide, many people have to carry it over a large distance, whether that’s by bike, cart, wheelbarrow, or worse: by foot. The other alternative is to chase after some water tanker drivers so they can fill up your deposit illegally, which is quite expensive, by the way.

It’s obvious that there are some people who take advantage of other people’s needs, although they are only playing their part in this never-ending fight for survival, which we have learned to put up with in our everyday experience.

Nobody tells us what’s going on, and nobody seems to care. The only thing we’ve been told is that the motor has been taken to Matanzas. I don’t understand why it’s been taken so far.

Days are passing by and everyone is trying to get by as best they can. People go to great lengths to try and resolve their problems and they have learned to accept everything without putting up a fight.  A Carlos Varela song comes to mind which says: A man shouts save yourself if you can, the tide is rising every day that passes.

In my home, the huge fiber-cement tank will last us for a couple more days. My mother, who has always been known for her great solidarity, is now hawking that she only has “an inch” of water left. Anything she can say to make people who come and ask, turn away.

She has let a neighbor in need fill drinking bottles on one or two occasions, but not without first trying to turn them away with all of her diplomacy, which she has pretty much run out of. As I leave at dawn and come back at night, I’ve become an accomplice in silence, because I understand that when the water does run out, it will be my responsibility to carry it or pay for a water tanker to come. 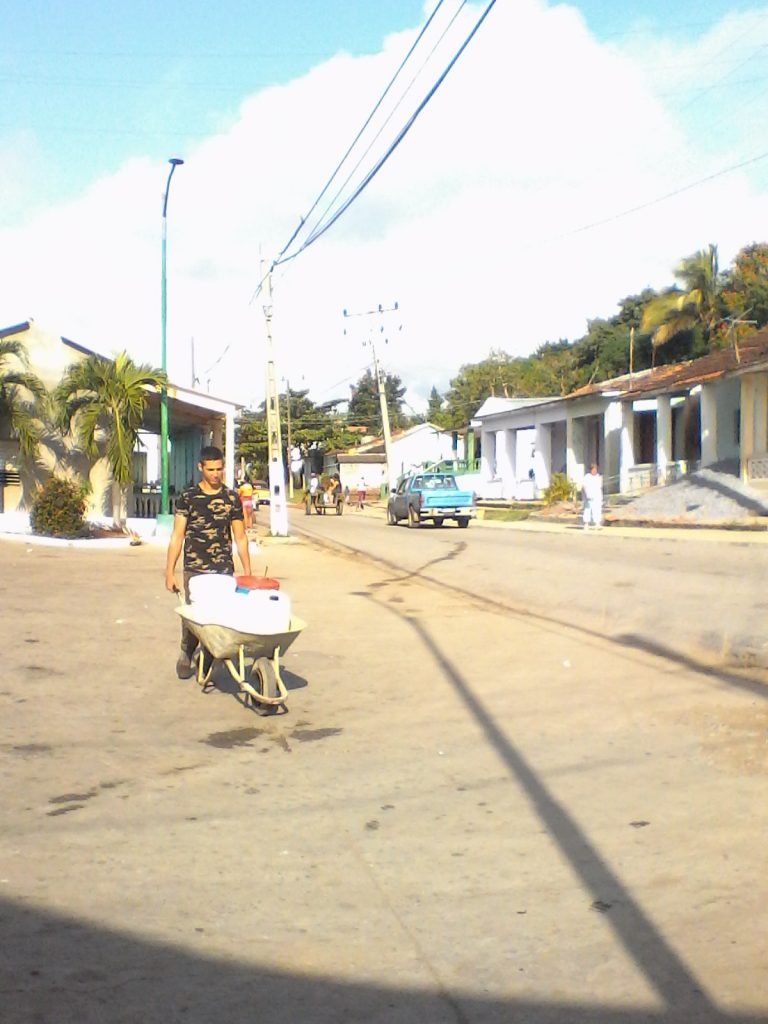 The best solution would be for local authorities to supply the town with tanker trucks, which they used to do in these situations, but word has it that they don’t have fuel for them. Not a drop, and the “temporary” crisis joins our water shortage headache.

As I’ve already written, nobody says anything. When I say nobody, I’m talking about the local People’s Council. In that absence, information is going around as rumors or gossip, however you want to call it. But what people are saying is that the water supply won’t be fixed until sometime in January.

It seems that people won’t be able to do the fruitless New Years tradition of throwing out a bucket of water onto the street to wash away all the bad things of the year.

In the meantime, I’ve just checked my tank and there really is only a little bit left… So, I’ll have to hire someone to fill it for me illegally, because there is fuel for this, but I can tell you one thing: I can go without anything else for the New Year, but welcoming in the new year without water would be too much.

One thought on “Water for the New Year!”