Going to the Havana Book Fair back in February wasn’t among my plans this year since my time and money were limited.

However, I was compelled to go for the launching of a book by a friend, Dmitri Prieto Samsonov, who received the Pinos Nuevos award for his work Transdominación en Haiti, which deals with an issue deserving of that type of analysis and the close attention of Cubans.

That was reason enough to attend, but added to that was a request from the author to use on the cover of the book my illustration, Fiesta por el Escribano (Party for the Scribe).

This invitation was made after signing the illustration contract, which was for the usual low pay by government-funded publishing houses for illustrations.  I went especially out of my commitment to Dimitri but also because my work would go on my resume – which is something important for me.

The book was put out by Sello, which is a social science publisher belonging to the New Millennium Group of the Cuban Book Institute.

I confirmed the date of the book launching, and as they had already told me I wouldn’t be getting credit for my work. 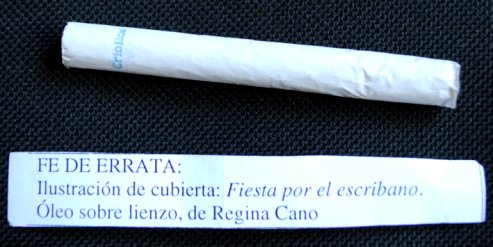 At the fair, the assistant director of the publishing house justified the omission of my name by saying that “it was an unforgivable slip” but that the country doesn’t have the resources to bear the costs of reprinting of this book — the usual paralyzing barricade of an argument — and in this way, after five minutes of verbal effort, my name slipped into anonymity (with the credit then going to the designer of the cover).

Could they ever imagine the state of my spirit with respect to this?

In principle, contractual relationships and the violation of the author’s moral right allow me:

– To request the halt of the sale, which would be “shitty” for my friend, given how difficult it’s to get published in Cuba.

– To take the case to court and request compensation, which would be especially “shitty” for me, since I would be encroaching on the environment from which I make my living — physically, monetarily and in terms of my spiritual energy — with a less than encouraging chance of success, since both entities (the publisher and the court) belong to the government, and the few resources that might appear in the end would leave me with almost nothing in my hands.

– Or I could impose certain requirements on the publisher: that they explain what happened in writing, that they put an errata sheet in all the books, and that they commit to give me credit in any future reprints.

I decided to negotiate with the publisher, who accepted the responsibility for what happened in the first conversation, assuring not to have acted in bad faith.

In the second meeting they gave me a letter indicating that the responsibility lied with the printer – located in Holguin, over 400 miles away on the other side of the island.

With the usual doubt that comes with such actions I decided to call the printer — although my contractual relationship was with the publisher — those who showed signs of humility asked me to forgive them for their involvement.

The printer operators thought they should have consulted with the publisher regarding the digital information received, where in one of the parts — with protected access — my name appears and in the part recognized as the object of his work I’m not.

I found out in passing that among artists exists the opinion that underrating the work of illustrators has been a frequent practice by publishers since the 1970’s and ‘80s, which is why the earlier illustrators refrain from any work for them.

So folks! Disrespect is painful.