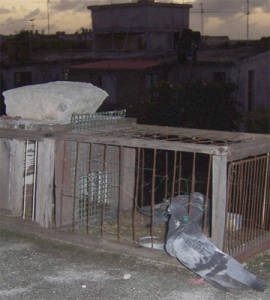 HAVANA TIMES, Jan 2 — One can go through the neighborhoods of Havana and see kids (teenagers) looking up toward the sky, observing, or better said, looking for something. For those who are unfamiliar, this seems like something lacking an explanation.

However, the situation is one of pigeon breeders, who have always existed in every district of Havana ever since I was little, and I think that now there are even more.

“Did you see how that one took off of the roof.”

“Yeah, that’s a good one, look how it does the jala (attracts another pigeons)”.

“I have one of the best, it has “legs”(meaning that it doesn’t land on other roofs) as well as “seduction” (it attracts other birds with its flying and cooing).”

Accused of ruining roofs, snapping off TV antennas from their birds’ weight, and not letting people sleep (from their walking around on rooftops), the “Palomeros” (pigeon breeders) form a guild of “collectors”; they are also those who supply the market.

Pigeons here can cost between 25 and 50 pesos (1 to 2 USD). The general price is decided by the breeder but is determined exactly through negotiation. The buyers are themselves experienced breeders, novices or people who use the birds for sacrifices in brujeria (Afro-Cuban sorcery), for which some people prefer white pigeons. 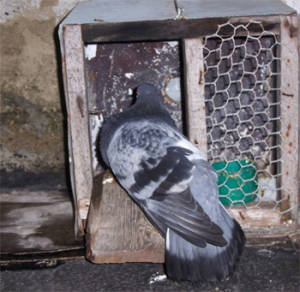 The most common breeding birds are the Buchonas (Raspeños, Laudinos and Morilleros), the Messengers (with red marks on their beaks and feet) and the Marroqui (or Moroccans). The predominant colors are white, blue, gray, piebald, smoked, white, brown and black.

People also engage in the robbing of pigeons from other roofs by using other pigeons. This is done with birds that are good for this (males or females), and which are managed by the hands of their palomero.

Some breeders put rings on the legs of their birds, where they write their own names and the date of the bird’s birth. If someone comes to claim their pigeon, this can be a problem, because with or without the rings the owners know their birds.

The brood is usually feed once or twice a day with beans, peas or corn, which provide them vitamins.

The males and females are generally kept separate, putting them together when they’re mates. They share in the “brooding” (7 to 10 days) and the feeding the nestlings, though they alternate the task: “one feds the young and the other rests.” The chicks hatch in 19-21 days, with a survival rate of 50 percent, and can reach the age of seven or eight years. 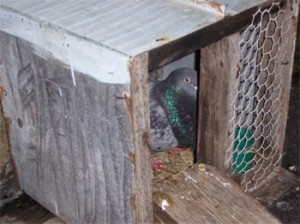 It sometimes seems we’re infested with pigeons, but diseases actually serve to regulate this population. Smallpox, “culillo,” “trazas,” intestinal parasites and hernias in the female, maintain this population at bay, despite the work of veterinarians. These represent risks to humans as well.

The “Pigeon Society” (Spanish: Sociedad Colombofila) exists in Cuba, but the vast majority of breeders have no relationship to it.

Their breeders claim that they seek entertainment and competition (indeed they say that there’s an event in Guanabacoa).
What’s certain is that this custom is maintained in a way similar to that of playing baseball in the street, and more than a few quarrels and vendettas have emerged out of this practice.

One can just as easily see a child as a 50-year-old man breeding these birds. Some do it as a business and others for pure hobby. The business often takes shape after the hobby, but in the end the breeder ends up losing sleep over their brood.