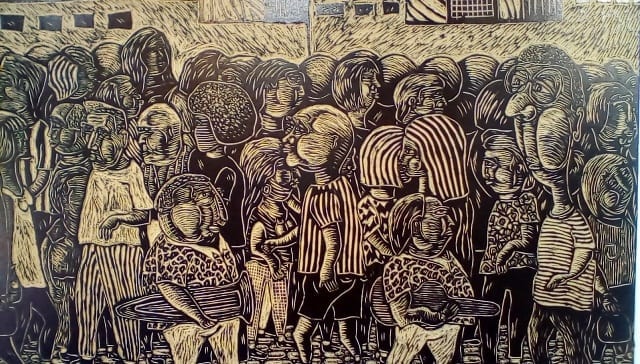 HAVANA TIMES — We have become accustomed to seeing a special kind of ethnography of Havana neighborhoods reflected in Luis Lamothe Duribe’s work, from the memory we have of his first exhibitions (which “Multitud” formed a part of) and this has imprinted itself as a mark of this Havana artist’s art in our minds.

Wanting to evoke our recollection of some plays put on here in the late ‘70s, ‘80s and we could say the ‘90s too, the “Mi Teatro Cubano” exhibition can still be seen over the next couple weeks at Havana’s Fayad Jamis Gallery*, in the Alamar neighborhood, until July 18th.

Lamothe, as he is popularly known, is an artist who you can see walking down the city’s streets after working (he has been a curator/exhibition fitter at the Luz y Oficios Gallery for the past 20 years, as well as a painter), but his wanderings are never unproductive, they then take life in his work, where he reflects ordinary Havana residents’ lives, their fates, wishes, wisdom, erratic or successful behavior, in the Central Havana and Old Havana neighborhoods, mainly.

This artist is known as an engraver because this is the medium he usually works with to create his art. He shows us common interactive spaces, he points out behaviors, he recreates people’s actions at a line in an agro-market, in trying to get on a bus, social life at night on the Malecon, reflecting recent and past memories, of a people who continue to gather and constantly share their lives in public spaces. “…a multitude who walk, struggle, trying to get by, sharing…” the artist tells me in his own words.

This artist invites you to travel the Havana you’ve already walked through, suffered and enjoyed in your own skin, describing stories that are noted down in researchers’ field diaries in black and white.

Lamothe doesn’t want you to miss this experience, but he doesn’t want to lose his own impressions about his home city. Delving into the past memories that make him and make us at the same time, he reflects this in every engraving where he is present or not, reaffirming a space of belonging and participation in this everyday life.

Walking through this exhibition by Luis Lamothe Duribe is something that I had missed, a person who is open to communication, who easily interacts with others and is remembered for his warmth and kind nature, a self-taught artist (which doesn’t detract from his work in any way, to the contrary in fact) and an knowledgeable figure which other curators/exhibition fitters respect because of his expertise which has come with many years of experience doing the same work.