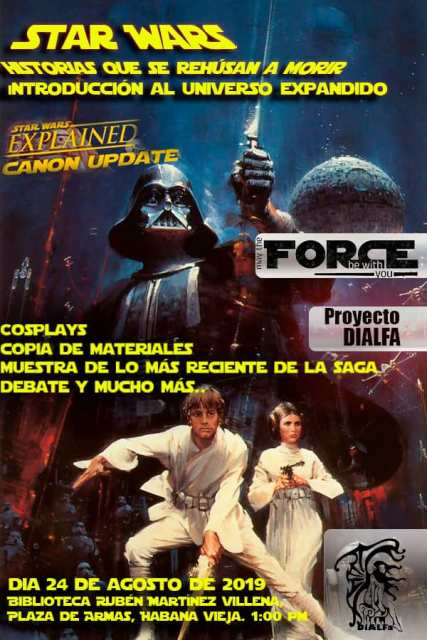 HAVANA TIMES – Star Wars, one of the greatest science fiction sagas to ever hit the movie screen, has been capturing the attention of three or four generations of fans all over the world and has formed part of the collective imaginary of millions of people for over 40 years, Cuba not being the exception.

This was the first edition of a series of annual events that will be held with the consent of the Cuban cultural project “Divulgacion del Arte y la Literatura Fantastica” (DIALFA-Hermes) space. Presented by Yoel Salazar this time, from the Pulpcomic.va group, at the Ruben Martinez Villena provincial library in Old Havana’s Plaza de Armas.

“Throughout our entire lives, ever since we were children, we have been huge fans of the Franchise and we have developed a series of studies linked to the content that was once known as Expanded Universe, a long time ago, before Disney bought it out in 2012. Expanded Universe was just the story of everything that had happened in the Star Wars universe from the very beginning, a long time before George Lucas started thinking about Prequels, up to 130 years or so, after Episode VI,” according to the Lore from the Enterprise, were their words at the beginning of the conference.

They continued: “… with Disney buying out the Star Wars franchise, all of this material that accumulated in over 30 years of stories was put aside, many of which hold the foundations (in terms of content) of what the Franchise is creating today.

It’s interesting how all of this new canon is widely accepted today, which is made based on stories that have already been told (…), are well-established and with characters who were widely accepted by an informed audience (…) who have been following George Lucas, on a journey (…) since 1977, with the premiere of Episode IV. Today (…), there is a great dilemma about: How is this content being dealt with (…)? How it has stirred a dilemma between fans, (in) George Lucas himself, among actors of the original trilogy (… and) among employees at LucasFilms Ltd.,” they added.

The day included a brief introduction about George Lucas’ life and the inspiration behind him creating Star Wars. He referred to the Franchise: to the old and new fans. As well as comparing Expanded Universe (renamed “Legends”) with the current canon, mentioning contributions by the Franchise’s fan community too.

Conference speakers talked about the special features that have made people consider Star Wars to be a pseudo-science, due to its complex nature and more than 30 years of work involving experts in every branch of knowledge.

While they debated the points that guided the conference, they also said that:

“We would like to raise awareness about the existence of all kinds of products from (…) Expanded universe among people (Cubans) who like Star Wars (…), which hold the plot of many movies that came later.”

“We aren’t here to side with any group, we don’t believe that this will resolve anything, but hope that this will persuade those who don’t agree with our choice to stick by our inclusive message.”

“No (…) we don’t repudiate any of the content that has been conceived throughout the history of the saga, we study all of it, overcoming any emotional bias in the process as much as possible.

“We don’t support any display of competition that stems from opinions that are dividing the Fandom, but focus instead on looking for the advantages and disadvantages, from a distance (…) of each and every movie that has been produced since 1977 (…) up until the present day.”

“Our intention has never been, nor longs to be, to be understood as an absolute truth (…),” they stressed.

The exact opposite of what is happening elsewhere in the world, Cuban fans and viewers on the whole, haven’t had access to timely and important information so as to enjoy every moment of the movement, from the creation and dissemination of Star Wars Expanded Universe and all of the volumes this comprises, including: movies, videogames, roleplay, TV series, comics, novels or cartoons that were on the market.

Which is why an event like this one completes the void of Cuba’s “orphan” status when it comes to the dimensions the Saga has had on the rest of “connected” humanity.

Interview excerpts were shown, as well as pictures of forums, TV shows, film projects created by fans, and even a flash mob video of an everyday scene on the street when it’s suddenly overtaken by Star Wars characters.

Details about fighting styles, weapons, bullets, armor, shields etc. were given, and there was mention of the existence of planets and peoples who form part of the Expanded Universe.

Unexpected oddities were also spoken of, such as the affiliation of many British people with the “Jedi religion” in the 2001 census (while Wikipedia states that Jediism is present in other places too).

The conference also included a Cosplay event and gave people the opportunity to copy digital media onto USBs and take it home.

It seems that Cuban followers of the Saga will now have an annual event where we can come and share our impressions, dress up as our favorite characters and learn more about the famous Star Wars and the dichotomy between the Light Side and Dark Side of the Force, balance and dictatorial exploitation…

TO BE CONTINUED…! (next year)

“May the Force be with you”