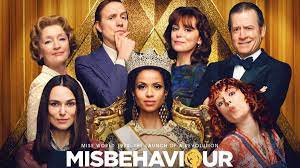 HAVANA TIMES – A few months ago, I watched a movie that I really enjoyed; it was called “Misbehaviour”. Keira Knightley played the lead and it was directed by Philippa Lowthorpe.

The movie is about one of the most important competitions in the world in the 1970s, which was held in London, the “Miss Universe” contest. It was one of the most watched shows in the entire world, with over 100 million viewers.

Things have changed a little since then; but, despite these changes, there are still people in this world who only value women for their beauty. And as if that wasn’t enough, also commercialize it.

In the movie “Misbehaviour”, the protagonist, a young married woman, with a son and job, joins a feminist movement to bring down this show that belittles women before the world’s eyes. The story has a plot twist when the winner of the prize is a woman from Grenada, with black skin.

On the other hand, and because of the technological advantages we have today, I remember seeing a photo of US model Kendall Jenner in a bathing suit go viral a few days ago, showing the world what “should be” the perfect woman’s body.

Yes, credit goes to this young and beautiful woman, but so many other great women come to my mind. Those who have taken the spotlight in History, the Sciences, Arts and Literature. Women who not only appear on magazine covers because they probably don’t look after their bodies so much.

Without going too far, we have 19-year-old Alyssa Carsson who became the youngest person to pass NASA’s tests. She is now preparing to be the first woman to travel to Mars, which will happen in 2030.

Lissette Villa and Marilyn Solaya, Cuban documentary maker and filmmaker respectively, have been defending all women’s rights with their work, for years. They are joined by the outcry of all of those women who have been raped, discriminated and ignored by an unnecessary society, that only sees women as an object a lot of the time, not only as a thing of beauty, but as something that can be reproduced and exploited.

Movies such as: Misbehaviour, Vestido de Novia, by Cuban filmmaker Marilyn Solaya; The Color Purple by Stephen Spielberg; The Suffragettes and the legendary Thelma and Louise (there are so many) are movies that portray women’s liberation.

There is still a lot to learn, there’s no doubt about that, and just as film is an excellent tool for us to reflect upon this matter, it’s also true that many media platforms are still used to show women as a thing of beauty, and don’t show much more important attributes.

I was born in the 80's. I love nature and animals, as well as my country. I admire the sacrifice of a people. I consider myself a simple and honest person, therefore I detest injustices. I have a taste for the arts in general, but especially for literature, photography, and cinema. I believe in the power of the word and in the ability of the human being to change the world.