HAVANA TIMES — My neighbor tells me that her son, who began studying at the Enrique Jose Varona Pedagogical Institute affiliated to the University of Havana, was taken aback when in English class (the subject he hopes to graduate in) the teacher asked them who didn’t have a smartphone.

The reason why he asked this question was very practical: the teacher gives them homework using the Zapya application, which means that students are forced to have access to an Android phone.

Out of the whole class, there was only one student who didn’t have a smartphone and it’s easy to imagine just how he felt when he had to declare this. My neighbor’s son doesn’t have his own phone, she had given him her phone that day by chance. It’s the only phone they have in their household and it was just a few weeks ago that a family member had brought it from the US.

When I heard this story, I thought about how it would have been more honorable for him to have revealed his real situation and have sided with the only student who didn’t even have a borrowed phone. However, I know from experience that solidarity is becoming a more and more out-dated phenomenon, more so in youth environments, where a single unspoken law rules: appear to be at least middle class, it doesn’t matter how many shortages, anxiety and desperation there is hidden behind the curtain.

Or maybe, there’s a more blunt way of putting it: those who speak the truth don’t fit in at Cuban universities.

Imagine the student without a mobile phone telling his parents about the shame he went through, reproaching them, not just because he’s not on the same material level as others, but because he now lacks a necessary tool for his studies.

Imagine his distressed parents, racking their brains trying to come up with a solution to make up for their son’s new need, because they didn’t want to discourage him on his way to becoming a professional.

This incident makes me question how the management at the University would react if these parents were to complain that the center is demanding that their students have study materials that the Revolution cannot give them. And which parents can’t even pay for with their salaries.

However, what young person wants to appeal to such an argument which would be the equivalent of putting himself in ridicule. New times mean new speeds and you have to get onto the bandwagon, no matter the cost.

There’s no doubt that the poor people on this Earth are becoming more and more isolated. When I walked nearby “La Guayabera”, a cultural complex that was established at what was once Alamar’s textile factory, I found myself remembering what they had told me at junior high school which stood just a couple of meters away. Those Political Knowledge classes that emphasized the superiority of socialism as a social system.

In this cultural center’s lobby, there is a panel of photos which were part of the “City of the Future” project of Alamar, built by modest men for a world where there would only be one social class: the working class.

Although I was just a little girl back then, I accepted that “work” back then didn’t mean “to struggle”, nor “profits” a “misappropriation of resources” but honestly earned money, without worries. Al least that was what I also learned at school.

In literature, it’s said that reality always overcomes fiction. It seems like the same thing also happens in philosophy. Socialism, who knows whether it was because of dogmatic errors or a mess of policy, didn’t work, however, as this has never been publicly stated, they can’t say it, and the outcome of this experiment is being quickly and widely established, it doesn’t matter what name you give it.

In front of “La Guayabera”, people of different ages line up to use the expensive WIFI connection with their smartphones, tablets or laptops. It doesn’t matter that these devices or internet access cards are also impossible to purchase with a state salary. At this time, nothing is being said about the system’s inconsistencies, they compensate themselves, and everybody knows how. 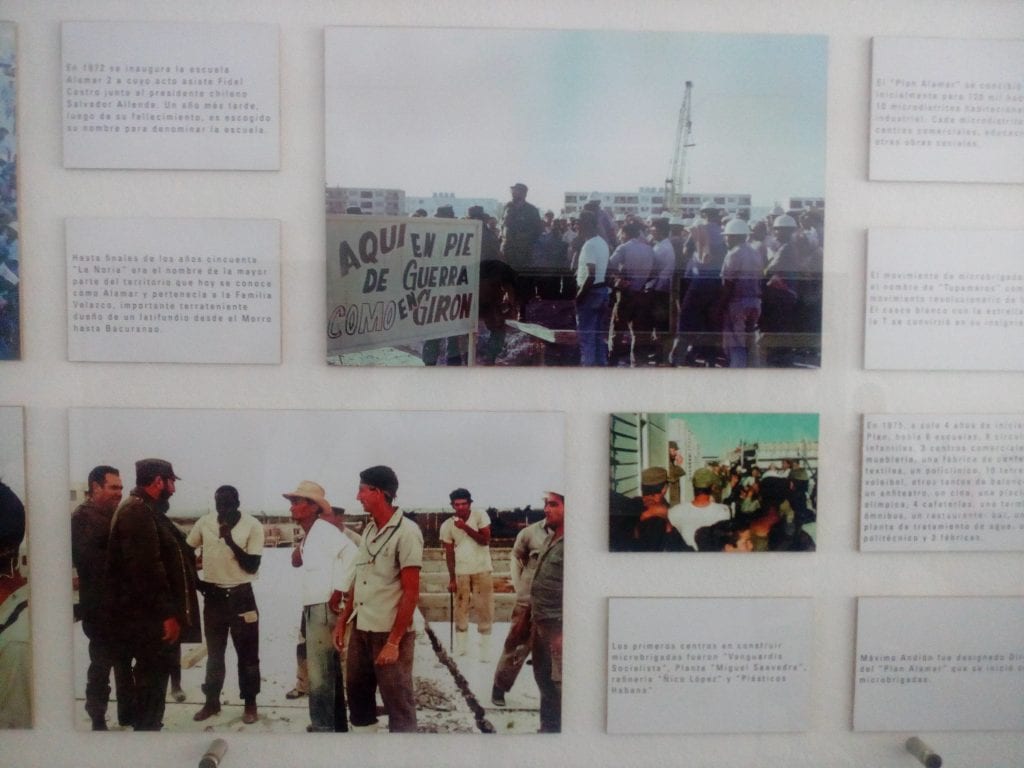 If somebody were to ask me what the Revolution’s contributions have been to Cuban society, I would have to say, personally, without hesitating that there have been two: exile and lies. Not because I don’t want to recognize the achievements that have been published to death such as free healthcare and education, but because these have been markedly damaged, while the other two only continue to grow.

The atmosphere inside La Guayabera, and around these same photos where you can see Fidel standing with cheerful white helmeted troops, is frivolous and competitive. People don’t come here to consume culture but to consume food, drinks, and sweets and to show that they aren’t the working class (even though they are).

Throughout history, the future belongs to those who have. The sad thing though is how much it costs Cubans “to have”. And in addition to the suffocating goal to survive, we let ourselves put even higher conditions on ourselves, in a race where we are handicapped.

With the poor of the earth
I want to tie my luck
the mountain stream
pleases me more than the sea.
-Jose Marti, “Versos Sencillos”

2 thoughts on “A Cuban Without a Smart Phone”