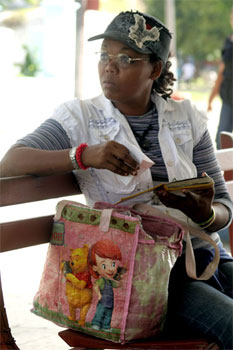 HAVANA TIMES — A good while ago, in front of the US Interests Office in Havana was a billboard that read: “We are happy here.” Of course on it was a picture representing Cuba.

That affirmation resulted in the circulation of a scathing joke that went: If we’re happy here (accompanied with a complacent look) imagine what it must be like “over there.” Of course that “over there” meant the Interests Office and the United States.

I was reminded of this because of a recent post in Havana Times entitled “The Misery of Poverty in Cuba.” Its author was Graham Sowa, a US citizen studying medicine here in Havana at the Latin American Medical School.

Because what I read was a translation, the translator themselves made note of the semantic ambiguity of the term “misery” in English, which allows one to intentionally exchange the words “unhappiness” and “poverty.”

In any case, the translation generated a question in my mind. If my memory serves me right, Graham said that no Cuban has ever told him that they’re “unhappy.” But have any of them said to him “I’m happy”?

Personally, I don’t know any Cuban, however poor they might be, who sees themselves as living in “misery,” although this means recognizing at least a minimal degree of misfortune.

In Spanish, “misery” is too pejorative. A certain foreign friend of mine who was doing a social research in Cuba was amazed to meet people who would show off their gold teeth while the roofs of their homes were about to collapse. The problem is that vanity is one of our most distinctive features.

In addition to indicating physical poverty or unhappiness, “misery” in Spanish also has a meaning that’s unthinkable for any Cuban: cowardice or the inability to fight. To admit to being “miserable” or “living in misery” would be to accept surrender and failure.

But I do believe that moral misery exists in Cuban poverty. It’s that the viable methods for survival have not only eaten away the country’s economic infrastructure, they’ve also destroyed the ethics of at least three generations. The high levels of corruption (tacitly supported by official tolerance) are not just a semantic game.

The word “theft” has been downplayed with false synonyms like “struggling,” “inventing,” “searching.” This is moral misery. I’m sure that First World residents would find it difficult to survive in the conditions in which Cubans live. Similarly, islanders who are used to “searching” would (and do in fact, I know several cases) find it difficult to adapt to a society in which they were forced to live only on their wages. 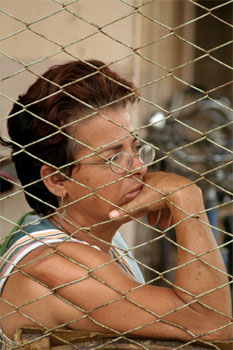 Someone once told me that in a store in Germany, when the staff realized that a Cuban had entered, they started playing the song “Guantanamera” as a kind of alarm.

Even if this was more of a joke than an anecdote, unfortunately it is based on the truth. Many unjustified measures are also taken in Cuban stores to prevent theft.

A friend told me recently that at his job (a ship repair yard) they had to call the police after a second incident in which tools were stolen. “This puts the department in a demeaning position,” he said to me, “yet no one was surprised about the incident. It’s such a normal thing for people to steal from their job!”

On the bus one time, I was an involuntary witness of a conversation between a woman and a man. She showed him a huge container of soda and two full plastic bags. She then proudly added, “You know I always go back home ‘loaded.’”

Both of them were wearing uniforms of food service workers. For the high percentage of the population that survives and even visibly progresses owing to such methods, ethics are not only abstractions but ridiculous obstructions.

At the bakery, I saw a customer complaining about the poor quality of the bread. The clerk’s response was dramatic: “Come on…don’t blame me, everyone here steals” (referring to the ingredients).

The relativity of the concept of “struggle” has merged the two victims: the government and fellow citizens. Losing control of the first logically runs the grave risk of losing the second. Human degradation, like cancer, metastasizes without distinction.