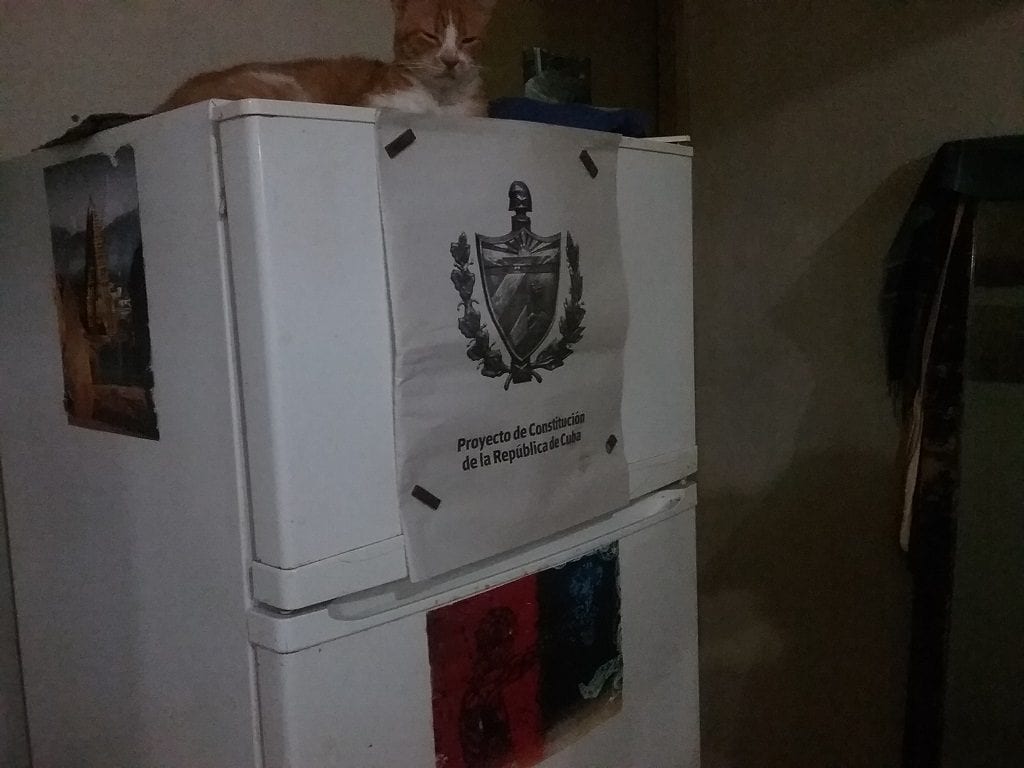 HAVANA TIMES – After the shock we received from the combination of numbers 3-4-9 (which I have written more than one article about on this dairy), a recent conversation about the draft Constitution which is being discussed (?) nationwide, led me to examine the other numbers that hold our fate as Cubans.

On my first attempt alone, I realized that delving into the Constitution is a challenge to our most simple logic and produces motion sickness.

“Cuba is a socialist State of workers, independent and sovereign, organized with all and for the good of all, as a united, democratic republic (…).”

I feel the first signs of confusion, of dizziness.

If it is socialist, what does its democratic nature involve? If you still have any doubts, Article 3 stresses:

“Socialism and the social revolutionary political system instituted in this Constitution are irrevocable.”

I take a deep breath and have a look on Wikipedia:

“Democracy is a form of social organization which gives power to society as a whole. In a strict sense of the word, democracy is a form of government where collective decisions are adopted by the population via direct or indirect participatory mechanisms which legitimize their representatives.”

Not the fundamentalism that “arises as a reaction when modern society begins to be guided by human laws and sets aside divine laws,” of course, but in the most orthodox religious sense.

That’s to say, this draft Constitution that has been plastered on public billboards with the disquieting phrase: “My will, my constitution”, isn’t even modern.

Now, willpower is “the ability to decide and behave as you wish. Something that is consciously expressed in human beings and other animals to do something with the express intention of getting a result.”

Willpower is synonymous with autonomy. What is “my will” if I haven’t even been consulted?

However, there’s no need to be prejudiced about this propaganda, I mean, publicity. In Article 1, it explains that Cuba is a “republic founded on the work, dignity and ethics of its citizens whose main objectives are the enjoyment of political freedom…” (!) “equity, justice, social equality, human solidarity and individual and collective welfare.”

Dignity with wages which force us to commit crimes, without the right to say whatever we are thinking, anyone who isn’t considered “socialist”. Prosperity that will never come from our wages, but from “inventing” on the side even though we will be “ethical”. Equity which doesn’t legalize my honest living as a journalist, but outlaws it, social equality which doesn’t give me access to leisure centers for MININT members or the military, or their efficient hospitals.

However, let’s celebrate! Because we will be “humanists”. (Humanism includes recognizing human reason, ending the Inquisition and the Church’s power, and the search for a more human spirituality, an inner spirituality which is more free and direct and less external and material).

Once again, vertigo. If I could, I would inhale on some cotton wool soaked in alcohol, but both of these are missing on the black market. I continue reading Article 3:

“Defense of the socialist homeland is the greatest honor and the supreme duty of every Cuban citizen. Treason against one’s country is the most serious of crimes; those who commit it are subject to the most severe penalties.  All citizens have the right to fight, using all means, including armed struggle…” (!) “when no other recourse is possible, against anyone attempting to overthrow the political, social, and economic order established by this Constitution.”

If I still understand Spanish correctly, this legalizes repudiation rallies and the death penalty if charged with “treason” for being a political dissident.

Taking deep breaths isn’t enough. I get up, I take a few steps, I watch the ground move underneath me and I grab my head with both hands. Did I not understand it properly? I carry on reading:

Article 5: “The Communist Party of Cuba, the single party, Marti and Fidelista in nature (reason cries out to me and says that these names shouldn’t go together), and Marxist-Leninist, the organized vanguard of the Cuban nation, sustained by its democratic nature and permanent ties with the people, is the superior leading force of society and the State.”

So, the Party is the leading force. The materialistic God that socialism establishes not only as a social system but as a way of thought. However, it will do this while keeping ties with the population. United Cubans, sharing the same ideology, challenging the mind which is multiple and diverse in nature, challenging our infinite imagination, forming a single mold.

The sanctified Party “organizes and guides common efforts aimed at building socialism. It works to preserve and strengthen the Cuban people’s patriotic unity…” [repudiation rallies included] and to develop ethical and civic values.”

Of course! Because a Cuban who insults, pushes and hits another Cuban has no other option but to defend this sacred Constitution which stands above their poor humanity. And the Cuban who just voices their opinions about what they would like for the country where they are registered by birth, is trying to “knock down the political, social and economic order”, established by the Constitution.

But, let’s be happy! We are civilized! Although citizenship is based on “respect towards your fellow man”. Although “respect is the consideration that someone or even something is valuable in itself, thereby establishing a reciprocal relationship: mutual respect, mutual recognition.”

I give in and close the draft Constitution, I put on in the fridge and walk on the walls or the roof and some lights that spin and spin making a funny dance towards the ceiling. Or is that the floor?

What does it matter if when they approve this Constitution, they free us of a gift as heavy as our own existence, of the dangerous effort of having to interpret reality for ourselves.