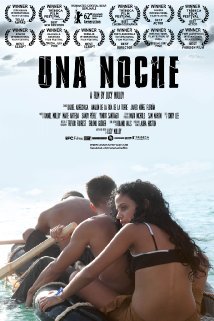 HAVANA TIMES – After watching the film “One Night” by the British director Lucy Mulloy, I’ve made three resolutions for the future:

“One Night” tells the story of three young Cubans trapped in the worst decadence who opt to escape the island on a raft.

The scene: a Havana that is “almost” believable.  And I say “almost” because the agglomeration of details renders the plot increasingly unbelievable despite the assurance in the credits that it was “inspired by real events”.

A squalid prostitute mother, ill with AIDS; a boss who stalks his young male employee; a hotel kitchen that looks like a workers’ mess hall.

I don’t know if having the protagonist wear her school uniform throughout the film is intended as symbolic, but it strains credulity; ditto when someone fleeing the police fortuitously ends on the roof of a high building and, ready to jump, is found by his friend at the precise dramatic moment.

I found it hard to believe that this same youth, still sought by the police, should try to seduce a pretty prostitute in the street, who turns out to be a transvestite; not to mention the timely menstruation of the protagonist while in full flight on the raft, attracting the horrifying shark.

At a velocity reminiscent of a video clip, we see the underside of the Cuban postcard, but highly condensed with everything crowded into one scene: clandestine businesspeople, thieves, whores…a miserable itinerant artist, a follower of witchcraft, young bicyclists hooked behind a bus, a “sharpshooter” who improvises a fish as a sexual pacifier.  Filthy houses, a people crushed by poverty.

Scraps of a Cuba that continues to feel incomplete, no matter how much the actors strive to make themselves tangible with their marginal gestures, their break-neck language without diction.  Hyper-realism that in any case fails to give a deeper dimension to those heroes of the street, while the muted voice of the protagonist emerges in a poetic whisper, evoking subtleties incompatible with her character.

At the end, there is the precipitous escape in the raft, not towards the beckoning horizon but into the vacuum, into nothing, in order to prolong the suffocation until the end of the tunnel, to convince us that there is no possible way out.

To tie in with the fact that the three young actors – Javier Núñez, Anailín de la Rúa y Daniel Arrechada – leapt out of the grime – of the film?  of Cuba? – to request political asylum during their trip to the XI Tribeca Festival in New York where the film received awards for Direction, Cinematography and Best Male Actor.

Maybe now someone will be encouraged to produce a sequel dealing with the real history of these young people, who seemed to have as many reasons to escape as those of the characters from that nightmarish country portrayed in the film.  A country which, I happily confess, I don’t feel I belong to.