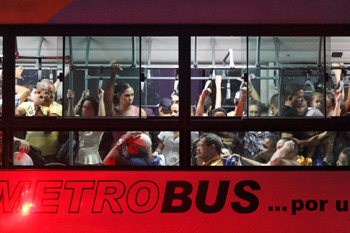 HAVANA TIMES — My colleague’s post, Cuba: Reasoable Doubt or Blatant Racism?, reminded me of a conversation I had with a friend some time ago. At the end of our debate, she, a black woman who had suffered various forms of segregation from childhood, agreed with me about how relative the causes behind discrimination can be.

These can go from the superiority of a culture’s resources and strategies, as suffered by civilizations that were conquered and eliminated, through the stigmatization perpetrated by power groups interested in political and economic control, as in the case of the Jews, to literal interpretations of religious precepts which social changes make unviable and atrophy the lives of women under fundamentalist regimes.

These problems tend to deepen because, once the norm has been established, subsequent generations cling to its thought patterns and not even new laws can radically change the collective consciousness based on them. It takes much longer to eradicate an ill than to adopt it. To make matters worse, other complex factors tend to increase this circular inertia.

Once, while watching a film about the Roman empire, I realized that, even though history lessons teach us that these civilizations enslaved people of the same race (white people, that is), every time I hear the word “slave”, I immediately associate it to a black person.

If we want to be honest, we would have to say that, even after slavery was abolished in the West, when modern societies were at their economic and cultural peak, servants (of any color) were commonly treated with the same contempt that marks the abyss between the upper and subjugated classes, a gap that is apparently insurmountable, as it still exists.

Of course, such a gap exists also in Cuba, the anomalous product of experiments in socialism and social justice. In the anecdote Yusimi shared, describing how a police officer asked to see her ID while we were gathering seashells at the beach, she forgot to mention that the officer addressed me, asked where I lived and, when I replied with an unequivocally Cuban accent, immediately asked to see my ID as well. In the blink of an eye, we were both equally “suspicious.”

As a woman, I have often suffered subtle and not-so-subtle variants of discrimination, attitudes that do not exactly bother me or make me feel worse, but which are part of a male chauvinistic tradition that is very difficult to uproot, particularly since it is nourished and reproduced by women themselves.

To mention a straightforward example, while among (male) intellectuals, I have felt the a priori dismissal of female intelligence in person, stemming from the fact that humanity’s intellectual, scientific and even artistic legacy is, for the most part, made up of male achievements.

At intellectual circles, it is also easy to fall under a rather uncomfortable category if one does not identify with the most widely accepted ideology, which can well be left-wing. It is even easier to be disparaged as mentally challenged for believing in god, and saying so, in a circle of agnostics and materialists.

I can point to a more extreme example to further illustrate this point: many a time, I have felt the victim of discrimination while with common people, only because I don’t like salsa music or reggaeton, and do enjoy classical music. I am made to feel guilty and even “elitist.”

Among those who take part in the repugnant reprisals against dissidents, I have often seen black people (some very expressive in their rage) and have wondered whether homosexuals, or anyone who has felt excluded because of the way they think, their sexual orientation, social status, or simply for not fitting the aesthetic cannon in vogue (one of the oldest forms of discrimination), also participate in those spectacles. As Kafka wisely said, “a man plagued by his own devils takes revenge on his fellow man without giving it a thought.”

What, then, can we expect for the mentally ill, the alcoholics, the destitute that abound in the city?

Discrimination is born of incomprehension and, above all else, a lack of sensitivity. I have seen people who have picked up many stray dogs and cats and cared for them (despite financial limitations) been rejected as “dirty”. No one gives them left-overs or cleaning products for these pets. No one feels that they are taking on a responsibility evaded by others, much less the State.

In our scale of values, animals of course occupy the lowest level: they can die in cruel sacrifices, scientific experiments, or at the hands of sadists.

Lastly, in the brutal fight for survival that is spreading across Cuba more and more, I see the elderly and the disabled being savagely displaced, such that, pushing fifty, I am already preparing myself for the may subtle and not-so-subtle forms of discrimination in store for me.

6 thoughts on “Speaking About Discrimination in Cuba”