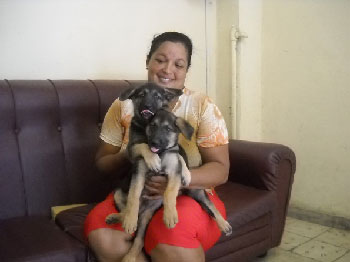 HAVANA TIMES — The new vet I’ve hired to care for my dogs came over today. I’d already gotten used to the previous animal doctor, a young man who had finished his training recently, somewhat introverted but very good at his job, to the point of having secured a wide clientele and an excellent reputation around the neighborhood.

Recently, I found out I would not be able to call him anymore because he had left the country. When I heard the news, I felt happy for him, but not for me, for it is difficult to find the right person for certain things in Cuba these days.

Many feel that having a dog in Cuba is a luxury. Others consider it something akin to a need. Yet others think it a kind of hobby, and still others have no interest in dogs whatsoever. I believe that, if I’m going to have dogs, then it is my duty to take good care of them. This is the reason I went in search of a new veterinarian immediately.

The new veterinarian I was able to find is the opposite of my previous one. He is an elderly gentleman, retired from the public health sector, who strikes you as a combination of many things, journalist, policeman, State security agent and dissident among these.

At least, this is the impression he gave me while he interrogated me about many different issues, in a conversation centered on the topic of corruption.

The fellow, now over 60, expressed his surprise at the corruption that has spread across the country at all levels, giving me examples involving himself and his son.

He told me that, six months ago, a cat had bitten his hand and he had gone to the emergency room at the Naval Hospital (located to the east of the Havana Bay area), where he was treated and sent home.

In the early hours of the morning, unable to sleep because of the intense pain in his hand, he had to return to the hospital. There, he run into the same doctor and told him he had had to come back because the pain in his hand would not let him sleep. The reply he’d gotten was that the person being kept up by the pain was he, the doctor.

He also spoke of his son, who owns a small restaurant and gets State inspectors off his back through “gifts”. As is often the case, he had many more stories in stock for me, stories that could have kept him going the entire afternoon.

Nothing of what he said seemed strange to me. That is the way Cuban society works these days, and changing this panorama is going to be extremely difficult, considering the urgent needs people face today.

Talking about these problems has become something as common as drinking a glass of water. But, no matter how much talk we hear about restoring social values, or implementing a new economic and social model in Cuba, plain, daily life makes me think we are light years away from seeing the light.

5 thoughts on “Will We Ever See the Light?”