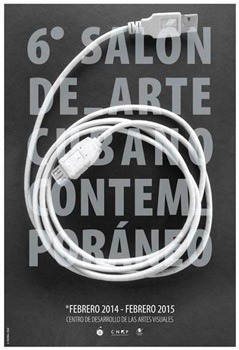 HAVANA TIMES — The 3D Film Screening was one of the highlights of the 6th Contemporary Cuban Art Exhibition held in Havana’s Center for the Development of Visual Arts from September 12 to 25 this year.

According to an introductory text in the exhibition program, “this non-profit cultural event created by artist Francisco Maso is aimed at all audiences and gathers an important selection of classic films, without which it would be impossible to tell the story of the seventh art.”

Cuba’s popular, privately-operated 3D home theaters were shut down less than a year ago following a capricious government measure which alleged, among other things, that the screening of 3D films had not been authorized under the license for operating recreational equipment or any other.

The “low cultural content” of the materials screened at these home theaters was also wielded as an argument for nipping these cinemas at the bud.

The great impact had by 3D films on people in Havana was evident from the moment these were introduced into Cuba. With it, a new means of recreation seemed to be born among the limited range of options available.

In response to this, this first screening focues on issues such as idleness, banality, popular tastes, cultural consumption and other daily problems.

One of the small exhibition spaces at the Center for the Development of the Visual Arts had to be prepared for the screening, as no ideal location for the projection was available within this institution. This recalls the “domestic and alternative nature of the numerous 3D home theaters that have now become history, going from private to public spaces,” Francisco Masó stated during an interview.

The criteria used to select the films in the screening is a noteworthy detail. The screening focused closely on the different ways in which power expresses itself in society.

With this screening, Francisco Maso avails himself of the artform not only to discuss a thorny subject, but also to promote the values of the “art film” (with such works as Battleship Potemkin, 1984, The Lives of Others, Citizen Kane and others), values defended by Cuba’s cultural policy as a kind of antidote to the venom of these new technologies.

This way, he also launches a critical crusade against all coercive, censoring and capricious practices that curtail human creativity and initiative.