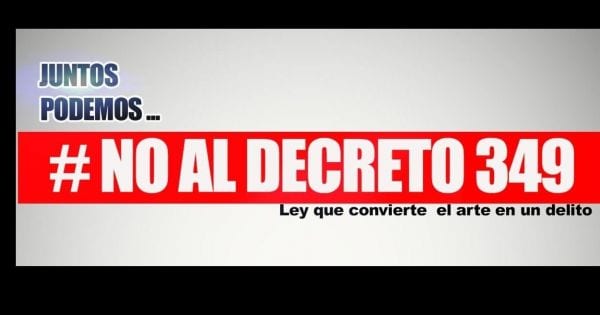 HAVANA TIMES — The most optimistic of us believed that Diaz-Canel coming into power as the head of the Cuban government might bring about long-awaited changes in political, economic and social affairs.

However, the results of the debate about the draft Constitution and the signing off of laws that are completely detrimental to the self-employed and other sectors of society, only goes to prove that change, if left in the hands of this country’s leaders, will continue to be delayed.

I believe that the Cuban people’s uneasiness, disappointment and uncertainty, which you can pick up on in the street, is what contributed to a group of people (myself included) to stand up to one of these new regulations.

Let me leave you with a text that several of us have written, which promotes a petition and, once again, calls for a dialogue between institutions and citizens:

The first act of dissent was carried out by artists Luis Manuel Otero Alcantara, Iris Ruiz, Amaury Pacheco, Soandry del Rio and Yanelys Nunez, on July 21st, on the steps of the National Assembly of People’s Power, at Capitolio. The peaceful protest that day involved smearing their entire bodies with excrement and taking to the street with a sign that read: Free Art. No to Decree-Law 349. Although only one of the participants was able to do this in the end as the other four were violently arrested.

Our opposition to the implementation of this law isn’t only because it will directly affect self-taught artists, artists who work in alternative and independent spaces without official recognition and those who differ in opinion to the State’s hegemonic system, but also because it is a document that legalizes censorship and discrimination, it promotes corruption, equipment and working materials to be stolen and is in direct conflict with our history as a nation.

None of our great Cuban artists, such as the great Benny More, Chano Pozo, Maria Teresa Vera, La Freddy, Ruperto Jay Matamoros, Rene Portocarrero, among others, would have been able to develop their talent if a law like this one had existed during their time, which monitors every artist’s actions with an iron-hand approach, which stops them from exhibiting or presenting their work because they don’t have a degree or studies in the arts, or because they aren’t protected by a government institution. This decree-law demands absolute devotion to the State’s cultural policy if the artist wants to exist as such.

This campaign, called “Cuban Artists against Decree-Law 349”, seeks the immediate repeal of this law; and it considers different initiatives to do this, both legal (we are currently receiving counsel from the director of Cubalex, Laritza Diverset) and artistic, because this is the work of its main agents.

The campaign includes a petition which calls upon Cuban and foreign artists living in and outside of Cuba. Their support will help to put pressure on the Cuban government, who we are also demanding that they meet with all Cuban artists to discuss cultural policies in Cuba over the next few years.

We are fighting for the emancipation of art because we believe in its transformative potential. No government in the world should dictate what the course and principles of art and its creators should be.

This is a video made by the campaign against Decree 349.