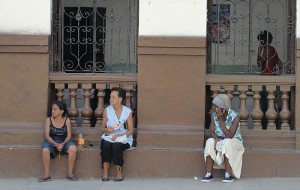 Cubans are ever-increasingly breaking the silence barrier and expressing their collective disquiet.  I was a recent witness on a packed bus when a collective burst of laughter signaled the approval of a politically risqué account that an old man tossed out.  His was citing the figures for high government officials who ended up on shaky footing.  The joy was general.

Likewise, one Sunday at the outdoor agricultural market, an old woman who was rummaging —the best she could— through the sweet potatoes said, “these are literally rotten to the core, but if we don’t take them we’ll continue our bad living.”  To which the clerk added, “And our bad eating.”  A young woman who was behind me in line commented, with a certain degree of complicity, that this market was in fact a public assembly.

Then too, close to my house a certain newspaper delivery man always goes down the street bragging, “I’m the one who distributes the most lies in Cuba.”  Meanwhile some guys along the dark but busy 10th of October Roadway stepped in beat in a conga line while singing a refrain that went:

is what I want,

Me, for example, the other day I sarcastically asked a policeman on the bus if it would be possible to decrease violence in the streets as long as teachers are paid the same salaries as he and his fellow officers receive.

It turns out that many people —gradually and without plan— will reach a point where they blurt out what they actually think.  What’s most surprising is that many of those who hear them agree, while those who want to avoid saying what they think remain silent.