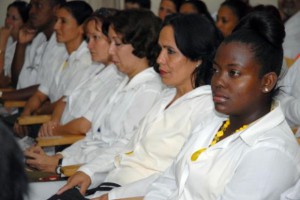 HAVANA TIMES – Health problems begin to spread across Cuba as the government begins to lose the firm hand of the Committees for the Defense of the Revolution (CDRs) to impose its epidemic-control methods and procedures on the population.

Historically, the Castro regime has relied on its authoritarian potential to hasten the administration and management of social processes. The urgency of the problems it has faced (outbreaks of dengue and cholera, for instance), and the impact these could have on the regime’s international prestige, are the factors that have established the limits of civil liberties on the island.

To fill the void left by the CDRs at the neighborhood level, the government turns to Public Health institutions with resolve in order to exercise control over the population. Accordingly, medical personnel have taken to the streets to grab the bull by the horns, coupling medical attention with authoritarian control over patients.

They pressure, threaten and go as far as accusing people of political misdeeds when they refuse to be hospitalized following the detection of symptoms that fuel the paranoia of doctors and bureaucrats.

The most shameful thing is that the will of citizens should be ignored, and that the situation a person may find themselves in at the time of the examination should be trivialized, taking the government’s disregard towards self-determination to unimaginable extremes.

This way, the regime substitutes the militant work previously carried out by the CDRs with the work of public health professionals, deploying outdated by still-effective authoritarian mechanisms.

In the prestige that the medical establishment still enjoys in Cuban society, the regime discovers an exchange capital that affords it a fifth column, one sustained by contractual agreements and not the kind of political indoctrination that is disappearing next to revolutionary folklore.

The generalized impoverishment and extreme depolitization of Cuba’s working class – of healthcare personnel, in this case – is, ultimately, what allows the regime to carry out this corporate turn and replace demagogues with technocrats.

Recently, it consolidated the maneuver by approving a salary raise for healthcare workers, making it next to impossible for the sector to ignore this fifth-columnist “call.”

On May 1st this year, thousands of public health workers took part in the rallies organized in celebration of Workers’ Day. The sea of white medical gowns made clear the central role that technocracy is to play in the establishment of the island’s “socialist” market capitalism.

2 thoughts on “How the Cuban Government Uses Health Workers”