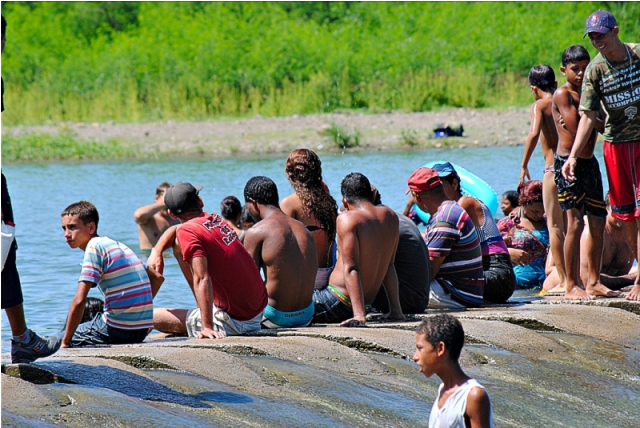 At a camp site, students will ask your permission to wade around in the nearest creek – so you let them. When you go to look for them, everyone is up to their knees in water, laughing and enjoying themselves.

When you look at their feet you discover they’re all barefoot, but nothing bad happens. Everything’s under control, with no need for authoritarianism or paternalism: Long live democracy!

Suddenly, while you’re talking distractedly with other adults, disaster strikes:

In the ambulance the nurses sound off saying that it was irresponsible to let the children play barefoot in that polluted river. They alluded to the teacher, although it was me who was the adult that accompanied the girl. I didn’t defend myself. Maybe the crying of Yuri — who was begging me loudly not to let them stitch her foot — was what sapped all my energy from me.

That was how my mother’s student cried as the doctor prepared the anesthesia so he could stitch up her foot in front of an audience of more than half a dozen people – nurses, the ambulance driver and the stretcher carriers. He gave Yuri two butterfly stitches.

Upon returning to the place where the rest of Yuri’s comrades continued with their camping, my mother welcomed me proudly.

“Listen here, you just graduated as a father,” she exclaimed.

“As a man,” I added. I had never seen so much blood without it making me wobbly.

Everything returned to normal. Yuri, perhaps from the effect of the anesthesia, continued playing as if nothing had happened. In the end we had an excellent day, the only thing left was to see how Yuri’s mother would react.

“Oh, I’m so sorry,” my mother began in front of Yuri’s mother. All of us, expectantly, hoping to discover in her face what would come next.

“Come on now girl,” the other woman said. “Don’t worry. That’s why I had her so young.”

So, nothing at all happened. But even so, when we got home my mother commented to me: