HAVANA TIMES – Ever since I left Caracas, four years ago, I’ve felt the need to be in contact with the earth and plants. I wanted to learn how to grow my own food and to breathe cleaner air.

So, when I left the city and went to live in a house with plenty of space to grow plants, I was happy. But just like things don’t normally end up how you want them to, I had the space, but not the water. I’ve told you before that the water supply around here is a lot less frequent than in Caracas. Normally, we’d have to buy the water we’re going to consume. The heat in this state (Lara), the harsh sunlight, was another factor that made things harder for a novice when it comes to plants. Plus, we had very little rain for two years.

I almost gave up on trying to make peace with the earth. Everything I planted was barely surviving because water was in shortage and small animals would fill themselves up on my plants, because there weren’t any others.

That’s how we came to accept an offer from a good friend, who would lend us his space, a some kilometers away from our house, so that we could set up our own project. His space had the key ingredient: water.

We went there, in a little two-door car, carrying some of what we would need for our organic farm. With the hard work of two friends who accompanied us in this venture, we cleaned up the land and made a circular vegetable patch, which gave us some of its fruits in a couple of months: coriander, Swiss chard, tomatoes and peppers. Outside the patch, we also planted passionfruit, okra, some beans and corn, eggplant, green onions and my favorite: peanuts.

But even though we had water, it was fuel that began getting too expensive after a few months. I’ve already told you (and you probably already know) about the great crisis in Venezuela in regard to many things, but especially gasoline. Long weeks of waiting in line to get very little, or paying scandalous prices was the only way of getting our hands on it.  The place was quite nearby, but it wasn’t so near that you could walk there and back, much less transport the small harvests by hand.

Likewise, buyers here don’t really care if you are selling 100% organic food, many of them don’t even know the meaning of the word. So, the project stopped being a profitable business, and it was with heavy hearts that we said goodbye to the place abundant in water.

We’re back in our backyard again, and the clouds have been kind this year and have given us lots of water. We have managed to buy a water pump that helps us a little more when they send the water tanker round (at least every 15 days now). Here, our goats have enough food and we’ve made a really secure coop for our chickens. Most of the time, our animals walk around free, digging up the earth or eating fresh grass (sometimes they even get into the house, but we’ve already discussed this at length with them).

We still need to finish off the grazing area for the goats and set out where the vegetable patch is going to be, we have enough work to keep us busy for some time while we get our space ready. But I remain firm in my determination to do what makes me feel good.

I know that the world outside is falling apart. When I say “outside”, I mean to say on the other side of the wall that protects our backyard. Leaving our haven and going on the other side is disappointing sometimes and takes away your desire to do nice things and listening to the news on TV or the radio is a lot worse.

Here, inside, the wind blows and butterflies and all kinds of insects fly in the bushes, birds sing night and day. Why spend time listening about the new currency revaluation? We already know the country has been dollarized and it doesn’t matter if they revalue the Bolivar a thousand times, it will continue to be worth less than a cucumber.

By the way, cucumbers will cost less than a Bolivar and many people will think that it’s not worth trying to set up a self-sufficiency project that is eco-friendly in a country that is falling to pieces, where everything seems to be against small business efforts. But if we don’t try, even if it is hard, what’s the point? 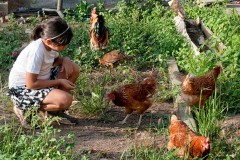 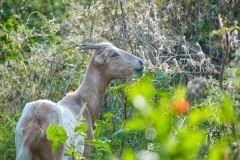 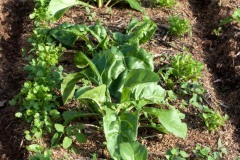 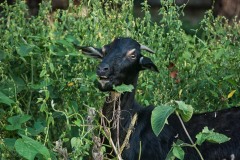 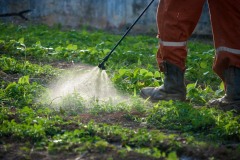 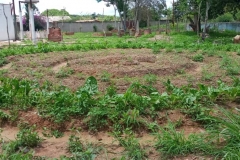 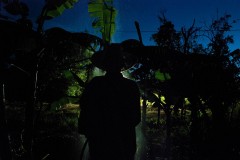 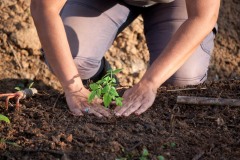 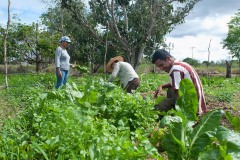