About two months ago Frank proposed that I work along with him in a made-for-TV movie. I’m not an actress or anything close to that, but the proposal was to do the still photography.

Although I’ve never done work like this, I had no doubt about accepting. When one has a camera and the desire to learn new things, the best thing to do is to accept any job them seems interesting.

Most films are shot in studios, but on top of that I had the great luck that “Los desastres de la guerra” (The Disasters of War) was being produced completely outdoors.

The first day we left for a quarry very far from the city center. If you haven’t been in a quarry before, I should explain that it’s a group of mountains whose innards have been opened in order to remove their essential qualities: stones that will then be reduced to powder.

The bare stones usually reflect the sunlight with great intensity. I sympathized with the actors, who had to remain on those stones, often on their knees, and out in this baking heat. For my part I went around the whole time well covered, though that implied two sources of heat. 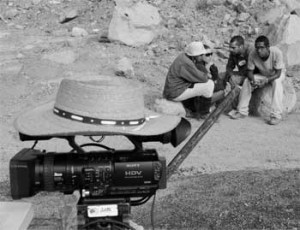 That first day I didn’t have a very clear idea of the things I could or couldn’t do. I immediately learned from the sound engineer that I couldn’t make click with my camera when there was some dialogue taking place around us. Later Frank alerted me that — much to the contrary of the photographs that I’m used to taking — the camera needs to remain in a horizontal position, apparently the cinema isn’t familiar with the verticality of still shots.

Through the photography director I learned some tricks about lighting and the best way to “dirty” an image. The lessons about lighting came especially in the second stage, when the shooting took place in a paper manufacturer close to a river in the center of Havana.

In every place we went, we seemed to be pursued by stones that, without prior warning, would dislodge off of the roof of the paper factory or down from the wall of the mountainside.

Most of us caught the flu, which stayed with us for the whole month of filming. The youngest of the actors demonstrated that, even if he didn’t wind up being an actor when he grows up, whatever he does he’ll do with love and professionalism, because he didn’t stop acting even when he had a fever, or even when he had an ear infection that stayed with him during the last few days of filming.

I don’t know how it would be working with other directors, but this time my experience has been almost magic with Tomas Piard. Getting to know him and sharing ideas and feelings with him is one of the most beautiful things that has happened to me recently.

To my friend Frank — because after all those early mornings and late nights in which we were together, I can now call him my friend — I thank him for having thought of me. Beyond the learning, it was as a pool of fresh clear water to work on something far from the habitual manipulative techniques of photojournalism.