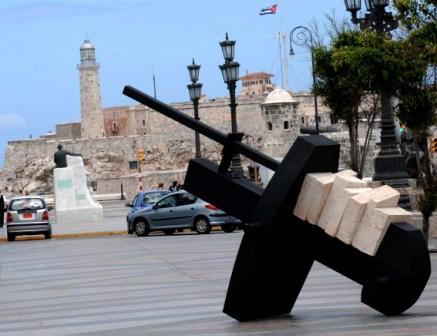 “What are you coming back here to do in Cuba?”  That was a question I was asked the night I arrived at Havana’s Jose Marti Airport after almost a year in Venezuela.

I had already gone through the booth where they checked my passport, so at that instant I was sending my carry-on luggage through the x-ray machine.  I got into a jam trying to untangle the necklaces I always wear from around my neck, but at that moment I had to do it quickly so as not to hold up the line.  Still, they persisted in getting tangled up with my handbag straps.

I’ve often been scanned by one of those detectors, not to mention having my bags x rayed; but that was the first time someone had asked me such a question so intimidating, so strange.

I have the bad habit of letting my mind wander a little outside of what the majority of people call reality; others might say I was “walking on the Valencia Moon,” or — to be more “Cuban”— that I was “eating shit.”  Yet no one warned me that they would ask me a question like that.  When I first landed in Venezuela I didn’t run into any similar type of question, though perhaps I was even half expecting one.

“What am I coming back here to do in Cuba?” I repeated, looking at her as if we spoke different languages.  The first thing that came to my mind was:  “I’m going to my house!”  What else would I be doing at that hour in the middle of the night?

The woman looked at the x-ray screen and back at me.  I suppose I still had my “shit eater” face because I still didn’t get the gist of her question.

The person with the metal detector that scanned my body — which fortunately was exempt from having undergone any surgical operation in which they might have left some screw inside me — looked at me more distressed than the other attendant, I believe due to my level of stupidity.

“What was it that you went to do outside of Cuba?” she then asked.

I listened to this new question with a certain amount of relief because I suddenly understood that I’d been taken off the hook from answering the previous one.

Anyway, it still seemed strange that the person in charge of checking my handbag had to carry out that task of asking what I had gone to do outside of Cuba.

Wasn’t it enough to look at my passport?  It was like she wanted to pose a question that wasn’t as strange as the previous one.

“Work, they sent me to work!” I replied.

After more than a month, today I recalled that moment, so strange and curious. But I’ve especially repeated to myself, “What are you coming back here to do in Cuba.”

I suppose the key word was “return.”

However, returning doesn’t always imply that the things left behind will be found in the same condition.  And it’s much less likely that one remains the same or even resembles how they were when they were no longer in a certain place.  Fortunately.

Change doesn’t always imply improvement, at least not in the eyes of those who can wonder “what you came back to do in Cuba?”

One thought on “Questions Upon My Return”