With a public of mostly euphoric youth, and little space to move, the music flirted with the salty air along the Havana Malecon to make the atmosphere hot.

Waiting for the concert to start, people walked from one side to another, opened bottles were everywhere, and excitement was brewing.  Few people stayed at home waiting to later hear from others about the group; it was better to listen to the explosive sound from up close.

First on the stage was Cuban singer Kelvis Ochoa, who sang many of his songs liked most by youth, one like “Juana” and “La natilla.”

Some people commented that the crowd was closing in as the minutes passed by and that they preferred not to be in the middle of the crowd when frenzy broke out with the arrival of the Puerto Rican duo.

Spectator Yaneisi, a 17-year-old student, said: “I have a CD by the group. I love them, but I can only listen to them when I’m alone in the house because my mom doesn’t like them.  As soon as I found out they were coming I knew I couldn’t miss them.  And if it’s René (the lead singer)…when he takes off his shirt…I go mad.”

Like Yaneisi there are thousands who moved and danced, despite the bad quality of the sound system, which prevented the music from being heard satisfactorily by everyone – though few seemed to mind.

“The audio is bad, that’s true, but what’s important is to be here, I can listen to the music later on at home or at parties on Saturdays,” said another fan, Osmani, as he raised his arms and chanted “No hay nadie como tú” – one of the famous cuts by the band.

“It’s a privilege for a currently popular music group to come here, with what’s being heard in the world right now and that they’ve come to show us how to summon the masses,” Osmani added.

“No one had to go to our jobs or schools and request that we show up.  This group has a power that few have attained.  Well, in Cuba we have bands that can turn out the public, but look how this is…you can hardly move your waist,” commented Pavel, who came with his small son and his wife to enjoy the show.

Fortunately the sea air cooled off the sweat soaked bodies of the musicians and fans from time to time.  Among the songs played were “La cumbia de los aburridos,” “Atrévete te,” “te,” “Querido FBI,” “Se vale tó” and “Pal Norte.”

An about 60-year-old man, seated on a curb resting from the wait under the sun, said: “I like this group because they don’t bite their tongues; they say what they think and that’s it.  They don’t get into politicking; they’re sincere musicians.  And that’s worth a lot.” 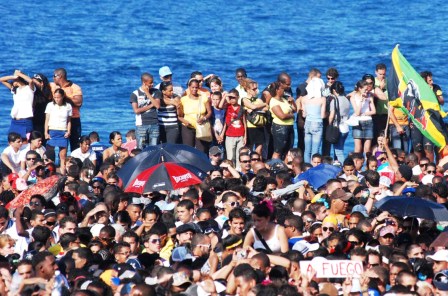 Toward the end of the concert, female Cubans demonstrated on stage that they could indeed move their waists like Shakira, responding to a challenge made by the musicians in a press conference this past Monday.

During the concert, singers Residente and Visitante received the International 2010 Cubadisco award for their commitment and defense of cultural diversity in Latin America and the Caribbean.

Rene dedicated the honor to the public and urged all those who are starting out in music to not be afraid: “It’s necessary to create music and to say things you truly think.”  He then dedicated their performance to all mothers of the world and to all political prisoners.