HAVANA TIMES, 21 enero – Every Friday, amid the noise of buses and cars on Carlos III Street, nocturnal lights allow us to see people (very few) sittings on rustic benches in a portico waiting for the sounds of guitars to begin.

The El Monarca de Agramonte Campesino Concert takes place from around 7:00 to 10:00 p.m. with a parade of aficionados and a few professional artists who love the tunes and the triple-time “seguidilla,” while others simply play the “tres” guitar. 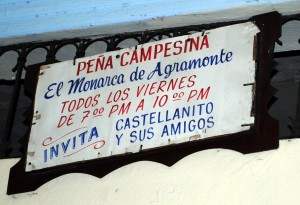 Led by Castellanito, a radio host who also performs improvised songs, those who attend (mostly seniors) can listen to friendly “controversies” where two singers rival in a sort of sung and improvised poem, or they can hear the complexity of “decima” (ten-line stanzas) sung by some studious poet of the theme.  Ulises Santos, Luisa Ortiz, Domingo Martinez, Rafel Guerra and Gilberto Castellanos are some of the performers.

The public is usually composed of people from the neighborhood as well as a passerby or two who stop by and then to continue on their way.  At a certain moment a woman collects the money (what each person contributes) to make sure the activity can continue. 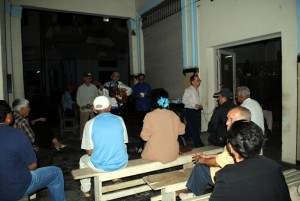 It would be good if someone were to sponsor or guarantee the get-together, or at least provide better audio equipment so that the artists and the audience don’t have to be inconvenienced.  An activity that promotes campesino music in the middle of the city should have better technical conditions so that it can attract more followers.

This musicale takes place on Carlos III Street, between Xifre and Infanta streets, though there’s no telephone for confirming the gatherings.