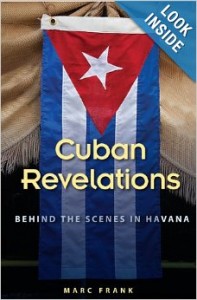 HAVANA TIMES — If you are reading any other book on Cuba right now, close it. If you were thinking about giving another title as a Christmas gift to a beloved Cubaphile, don’t. Make better use of your time and money with Marc Frank’s Cuba Revelations.

This 325 page (30% post-consumer recycled, acid-free) treasure is the most informative, accurate, insightful, detailed account on 21st century Cuba available. As an avid reader of anything written on Cuba, I place this book firmly on the top tier, virtually alone and towering over most.

You won’t find ideology or an agenda in here, but rather a comprehensive composition covering the multilayered, and often quite complex, reform process that has been underway in Cuba since at least 2006.

The treatment is appropriately contextualized -temporally, geopolitically, and meteorologically- and told with the preciseness of an old-school journalist, the detail known only by a witness, and the familiarity reserved for those exceptional foreigners who have managed to insert themselves into local life. This book is based on solid sources, first hand investigation, “behind the scenes” access, and an understanding of Cuba and Cubans that is very, very rare.

But don’t worry, this is no dry, drawn-out news article. Scattered among the chronicles and statistics are entertaining and invaluable anecdotes and conversations with friends. However, it is not an airing of gossip, speculation, or wishful or spiteful thinking.

Books that rely on anecdotes typically land in my circular file after the first chapter or two because most authors on Cuba use them, real or contrived, as a passive-aggressive tool for introducing their personal views and furthering their own agenda. But that is not Frank’s style. He shares these glimpses of day-to-day life and familiar chatter to deepen and enrich the discussion.

In fact, the author dispels many rumors and simplifications. My favorite example of this is his telling of the downfall of former foreign minister Perez Roque and former council of state vice president Carlos Lage.

By reconstructing events, as well as the contents of four “eyes only” DVDs that were shown to select Party cadres, he reveals the pair’s indiscretions and careless behavior that made them unwitting informants to Spanish intelligence.

Apparently Lage had been under investigation since before February 23, 2008 when he was, inexplicably it seemed, over looked for the first-vice president position that virtually everyone thought would be his.

On the more day-to-day scale, Frank seeks out the impact of Raul Castro’s tweeks to the system on the average person, not by educated guessing or pretending that Havana is Cuba (despite the book’s subtitle), but by traveling the island and talking to people, studying statistics, and examining, rather than discounting, the Cuban press and the government’s statements, both public and semi-private.

He shares proceedings of neighborhood meetings called to discuss mechanisms of economic reform and he describes what he calls “stealth reform,” that is, regional pilot projects that quietly go national (e.g. suburban organic farms) and unannounced policy shifts that seem to occur overnight (e.g. private control of barbershops) that armchair naysayers have brushed off as insignificant, but Frank recognizes as signs of a fundamental shift.

In addition to Cuba’s domestic scene, Frank takes full advantage of his unique “gringo in Havana” position to present a forest view of U.S.-Cuba policy, while not ignoring the important trees that make up and explain the poisoned relationship.

Moreover, he astutely passes on the background noise that many authors spend entire volumes on. Refreshingly, his analysis is not from the typical blue-blood perspective, nor is it full of Cuban rhetoric. It is more a sober, pragmatic analysis from the island side of the straits.

Mr. Obama would do well to give this a read.

In fact, I’d say this is a required stocking stuffer for anyone calling themselves a Cuba expert, consultant, or activist; all Cubans living in the U.S.; anyone involved in U.S.-Cuba policy or engaging Cuba economically; and especially those who think they have a strong grasp on Cuba because they spent significant time there in the last century…. and boy don’t we all know a bunch of those…

I only caution that it may be a little too “insider” for readers with just a casual interest in Cuba, those wanting their political views to be supported or attacked, or those looking for shallow tales of salsa, rum and Santeria. They’ll have to look elsewhere.

12 thoughts on “A Cuba Book For Obama’s Xmas Stocking”