HAVANA TIMES — Some months ago, Cuba’s official press informed us of the publication of a book titled Revolucion, Socialismo, Periodismo: La prensa y los periodistas cubanos ante el siglo 21 (“Revolution, Socialism, Journalism: Cuba’s Press and Journalists Before the 21st Century”). I have just finished reading the book and I would like to share a number of noteworthy things I found in it.

The author, Julio Garcia Luis, took part in the revolutionary movement against the Batista dictatorship. After 1959, he aligned himself with the new government and participated in several of its more significant campaigns. His colleagues describe his life and work as a journalist as outstanding – so much so that he was ultimately awarded the Jose Marti National Journalism Award.

The book makes an important contribution to our understanding of Cuban history because it delves deeply into the “old problem of democracy, freedom and the role of the press,” as the writer refers to these issues. The foray into these issues is strongly colored by the author’s ideological background, but that is true of everyone. If we accept his statements as sincere, the book affords us even more clarity about this truly complex, controversial and contradictory subject. It is telling, or perhaps merely coincidental, that I haven’t seen any copies of the book at Cuban bookstores – I only came across it once, at the recent International Book Fair.

The author develops a number of theses that I will try and quickly summarize, in order to pitch in my two cents. He claims that, around 1965, Cuba attempted to develop an autochthonous press model, without any links to the model that had been espoused by the former Soviet Union, but that the model ended up being very similar nonetheless. This is related to the fact that Cuba’s economic, political and social structures followed in the footsteps of the USRR, replicating Moscow’s vertical, authoritarian and Stalinist structures.

At first, Garcia Luis tells us, the editors in chief of Cuba’s press had a greater degree of autonomy. The high leadership (Fidel Castro, Celia Sanchez and Armando Hart) would personally meet with them and give them general editorial lines. Journalists then had a fair degree of autonomy in terms of how they covered the news and took on the different aspects of their work. The years went by and auxiliary apparatuses of the Cuban Communist Party took on these tasks. According to the author, these apparatuses and officials had a dreadful effect on and led to the demise of the entire press system. First, the Party deprived the press and its editors of faculties inherent to them. Then, the bureaucratic apparatus hijacked those faculties. 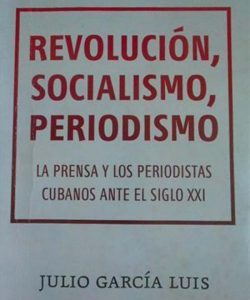 The press lost its autonomy and authority, the author tells us. Criteria based on what was convenient and opportune were imposed on the press, as was the imperative that facts ought to coincide with the system’s point of view at a given time. A diffusive, vertical and positivist approach prevailed; the “silence syndrome” took root and displaced any issue that did not illustrate the continuous and victorious advance towards socialism. With the consolidation of the Party orthodoxy, following the 1st Congress of the Communist Party in 1975, Cuba ended up copying, “almost word for word, the Soviet method of press criticism.”

As a result of this, Garcia Luis points out, the press became apologetic. Censorship, self-censorship and rhetorical monologues flourished. Professionally, the author translates this into monotony, lack of grace and attractiveness, news that are repeated by supposedly different newspapers, a schematic and impoverished language and other problems. He describes how journalists did not express their real feelings, concerns and opinions through the press, and that their condition as revolutionaries gradually became the fiction of formal unanimity. Even without lying per se, the author believes, the press created a fictitious country in which everything was going well and everything was positive and unanimous, even when it was actually facing serious socio-economic and moral crises.

The author believes that the top leaders of the revolution – Fidel and Raul Castro – were against this situation. He documents several occasions in which they made statements aimed at reverting it, at making the press a combative and critical promoter of the thoughts and values of a society of socialist men and women – and he is forced to admit the failure of all attempts at making the press more active in society, from 1974 to 2011. The press model adopted by the country, he claims, was incapable of offering a functional response to the country’s problems.

These phenomena are detailed and contextualized in the book. The fact they are exposed with a certain degree of unflinching sincerity is one of its great merits. This does not mean one doesn’t come across many limitations in the text. One is left with many questions and criticisms to make – perhaps the author left things unsaid because he has a name, position and reputation to look after. He wanted his book published, after all.

Since I have none of those restrictions, I can dish out some diatribes here.

The author’s fidelity to the top leaders of the Party is notable. Reading him, one gets the impression they are incapable of being wrong and that, if they could personally take care of everything, everything would be perfect. This regrettable and tired spiel is similar to what old folk say, that we have problems because “Fidel isn’t aware of these things and there are bad people out there deceiving him.”

The author’s fidelity to the top leaders of the Party is notable. Reading him, one gets the impression they are incapable of being wrong and that, if they could personally take care of everything, everything would be perfect. This regrettable and tired spiel is similar to what old folk say, that we have problems because “Fidel isn’t aware of these things and there are bad people out there deceiving him.”

Not once does Julio Garcia Luis question a certain conception of socialism, which we must apparently accept as a given. In it, there is a Party that deserves our obedience and that must direct the course of society through the State and government. One can criticize the administrative apparatus of these, but questioning the very existence of the Party is out of the question.

One could argue, however, that this particular conception of socialism cannot lead us anywhere else. The author rightly notes that the all-powerful Party ends up fused with the administrative apparatus, such that questioning the latter implies upsetting the former. Since Garcia Luis starts from the assumption that the Party must direct the press, he cannot overcome the dilemma of having that political force be at once the judge and executioner. Another fundamental principle we are forced to question is the social ownership over the press – we cannot but wonder if this is so when a group of officials can impose the restrictions the author laments.

Garcia Luis believes the press can follow three models: the market, the Soviet and the State model. He claims the first two are bad and that the third has to be the best. Now, according to a tenet of socialism that the author should be aware of, the State must gradually disappear, as Fidel Castro states in the much-quoted Words to Intellectuals. Garcia Luis, however, prefers a conception of socialism that entails an enormous concentration of power – and then he complains when State officials get into the habit of acting as they see fit.

The last and most troubling question stems from the statement by Fidel Castro the author quotes, according to which “no one knows how to build socialism.” Since no ideologue that I know of has begged to disagree, one cannot help but ask: how can the Party demand that we follow it when it doesn’t really know where we’re going?
—–
Cover photo: cubadebate.cu

8 thoughts on “A Journalist’s Take on Cuban Press History”