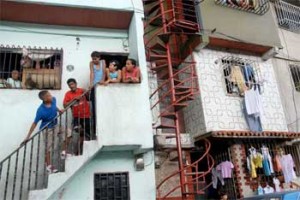 There are people from the east side who have never visited anyone living on the west side. They’re fearful of being attacked, or they prefer not rubbing shoulders with the people who live in that area or simply because they consider visiting it to be in poor taste.

Also, in some areas of the west, garbage collection is much less efficient than in the east.

But though there are plenty of drab and dreary buildings, tin-can collectors and the “barrios”, the west also has nice locales and buildings that are less gray.

People look out their windows and balconies, are not ashamed about washing their cars themselves or going out and selling candy or coming up with something else to survive.