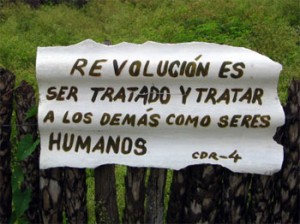 HAVANA TIMES — Imagine my surprise when I got to El Cayuco, the westernmost Cuban town, to find an infestation of elaborately painted public signs all over the place. I had been on my way to the Guanahacabibes Protected Area in Pinar del Rio province.

It was like that village had been hallucinating, though the people were everyday folks of course. Existing among them was this universe of phrases in aphoristic tones and the names of heroes throughout all times, but it was as if these people hadn’t been touched by any of this.

These residents are “Guajiros” (country folk), wearing straw hats and carrying hoes, who needed a good rain to not lose their crops. They’ve barely been influenced by the capital city’s “Battle of Ideas” campaign – characterized by giant, 2D, billboard-sized images.

Nevertheless, the famous five Cuban heroes were presented in all possible fashions here, although the vast majority of “heroic displays” represented these men with large white stars made of stone, concrete, or wood; in addition to these being painted on the wall of the corner store. 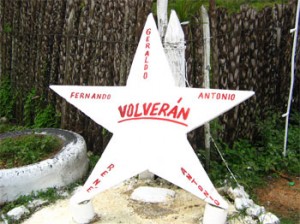 The most interesting contribution — whose unprecedented candor truly moved me deep within — was finding the names of the Cuban Five misspelled (“Geraldo” instead of “Gerardo,” for example). Plus, this was the only time I’d even seen one of the five names omitted and another one repeated, with Antonio getting the privilege of double billing at the expense of Ramon.

Of course those spelling details aren’t so important provided there’s a clear the sense of the message people are trying to convey.

That’s why I didn’t find it so strange when on one poster instead of “Circunscripción” was written “Sircupcricion” (equivalent in English to, let’s say, “Disstrick” instead of “District.”) 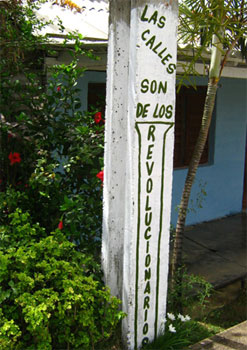 You can imagine the rest, or take a look at the photos. There were slogans of “Down with the Blockade,” invocations of Fidel, references to “vanguards” and “revolution, commemorative dates, etc. (By the way, there was one invocation that revealed my ignorance of historical dates: “Long Live January 13.” If any reader knows what this is referring to, please let me know.)

Of all the signs, there were only three that were outside the line of official propaganda. One was promoting a children’s game (with gender-appropriate language and everything), another one expressed a threat posed by the presence of some dog, and the third displayed that enigmatic phrase “Christ is the rock.”

All of this was only on one thoroughfare, the town’s main street, of course.

It’s evident that if these people had the opportunity to write on the walls, at some point all the creativity in them that has been held back for decades would be released.

As I proceeded through El Cayuco, what echoed in my head was that famous poem “For Strange Towns” (“Por los extraños pueblos,” by Eliseo Diego).

This is what I remember of that undoubtedly beautiful and peculiar place.