HAVANA TIMES – In 1981, Maria Cristina Eduardo moved from Havana to the Isle of Youth, where she worked as a specialist on the Traditional Popular Culture Atlas project of this region.

Researching the Isle of Youth’s traditions, she came across something that really struck her, even though it didn’t form part of what we could call “Isle of Youth’s popular culture”: the way that teenagers from different African countries who came to study in Cuba at this time were braiding their hair.

She began to dedicate her weekends to visiting these students so she could learn more about these hairstyles, how they were done and their meanings. She was accompanied by photographer Orestes Cardoso, who recorded these traditional hairstyles in visual images. 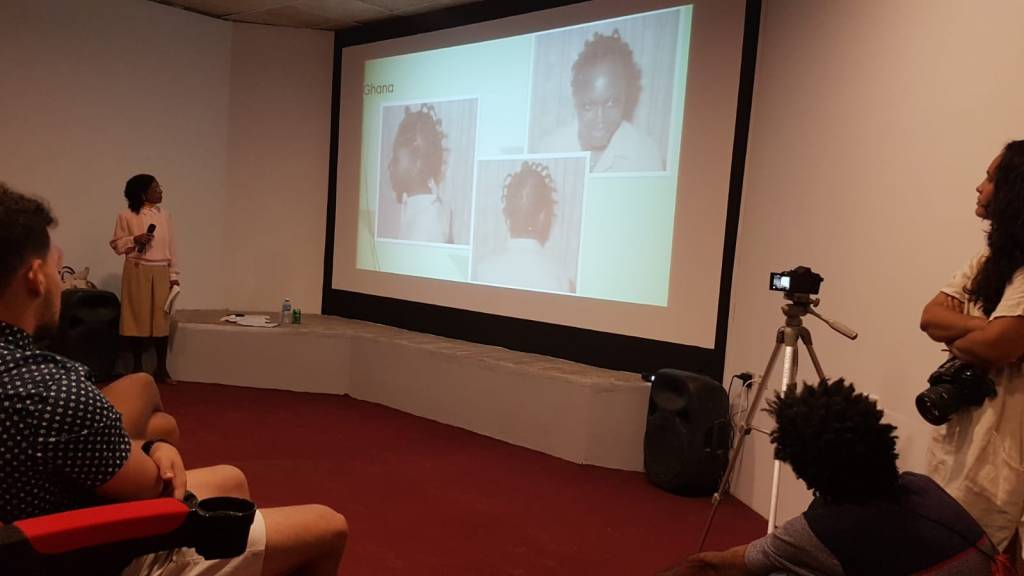 From Namibia, Guinea Bissau, Congo, Mozambique and Ethopia, these girls would do each other’s hair, reproducing the hairstyles their mothers used to do on them, as well as hairstyles they had seen in their communities.

Maria Cristina’s conversations with these young women allowed her to compile enough information to write a report about traditional African hairstyles in women, which she tried to publish twice with Orestes Cardoso’s photos. Her attempts were fruitless. One of the times she put the report up for publishing, she was told that the photos weren’t artistic.

More than three decades have passed since the two years that Maria Cristina worked on the Isle of Youth. She had already lost any hope of publishing her report with photos about this African tradition. However, it was fate that made her nephew talk to Susana Pilar (a name that most readers won’t be familiar with) about his aunt and her work. 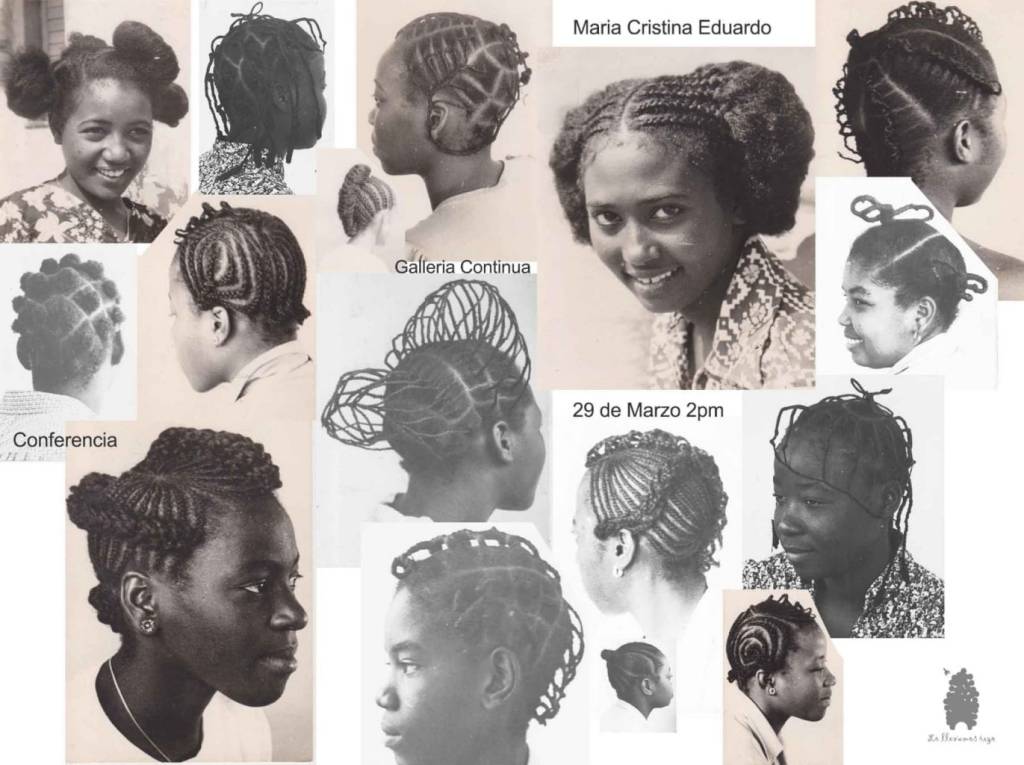 Susana Pilar is a 34-year-old painter and graduate from the San Alejandro Arts School. She organized the first Natural Afro Hair Competition “Lo Llevamos Rizo”, in 2015. The competition is returning in April to Havana four years later, with a varied program of activities. It includes the conference “Traditional women’s hairstyles from Africa”, which Maria Cristina Eduardo gave on March 29th, at the Continua Video/Art room, in Havana’s Chinatown neighborhood.

Photos by Orestes Cardoso and Raul Acosta showed the wide range of hairstyles, some more sophisticated than others, and no two the same. The conference speaker talked about symmetry and perfection, among other points. “The rows are extremely well done. Even though they were far from their own countries and nobody in Cuba was going to judge them, they did their very best to ensure they were perfect.” These hairstyles varied according to a woman’s age and social status, as well as to whether they were married or widows. Women of a certain age couldn’t have a certain hairstyle; others weren’t suitable if you were going to a funeral.

However, these hairstyles can no longer be seen on the African students who come to our country. Sometimes, they have hairstyles that seem to imitate those traditions, but they are really just implants. Some girls have straight hair implants or their own hair… straightened. 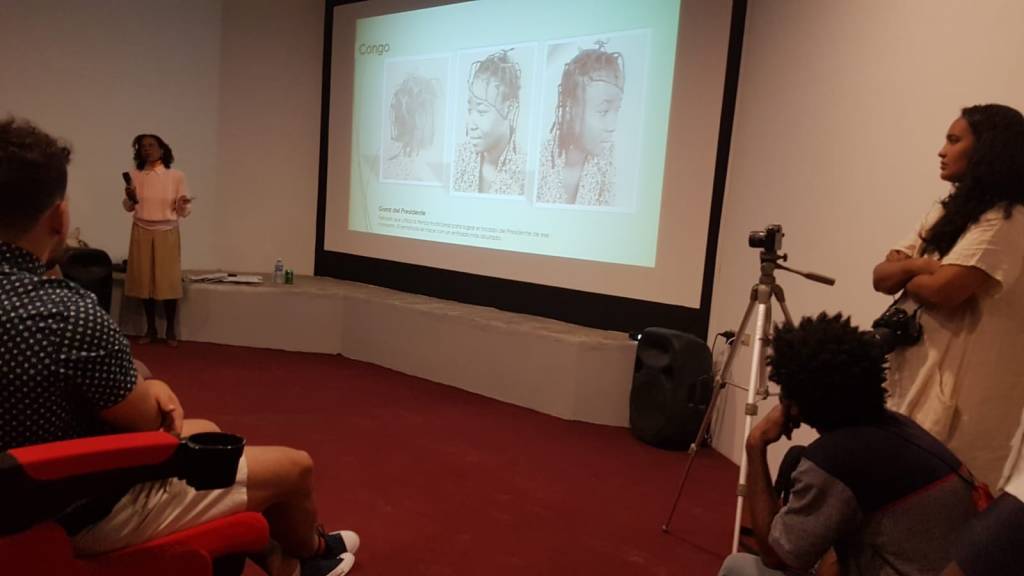 It’s the Western beauty ideal that has been imposed on the world, which the majority of black Cuban women haven’t been able to escape either. Some women in the audience, competition participants or followers of “Lo Llevamos Rizo”, have shared their own personal experiences with their hair, how they have had to challenge aesthetic standards and even their families, when they give up straightening creams, keratine and hairpieces.

One of the obstacles that women face to leave their afro hair naturally curly is the lack of an industry that produces hair products for our natural hair, one of the women present pointed out.

No longer seeing these traditional hairstyles among the African women coming to study in Cuba, Maria Cristina began to become interested in the way Cuban women style their hair and this led her to meet various hairstylists. 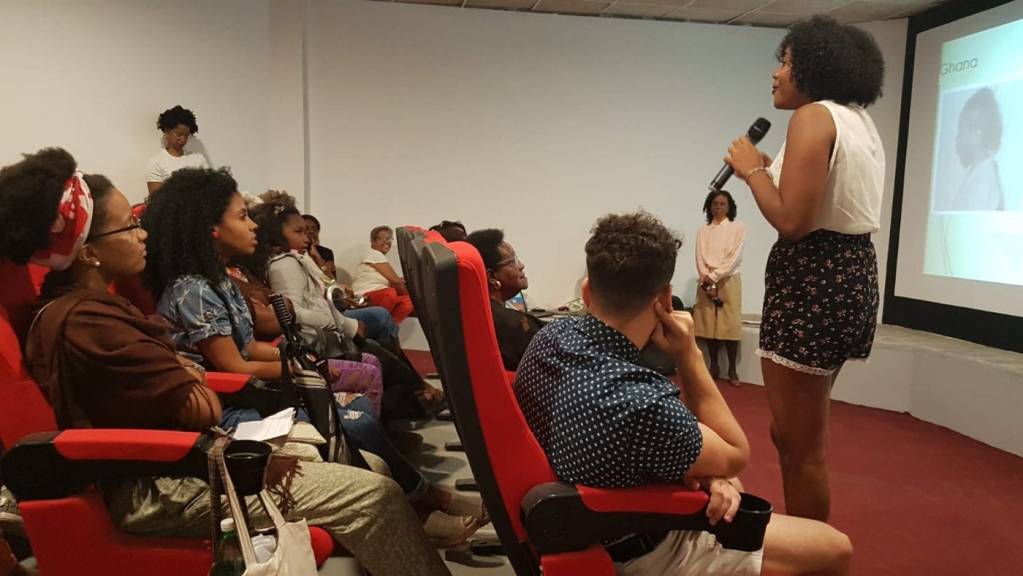 One of these hairstylists was a woman from Guantanamo who said that she hadn’t received training from any African woman, but that her dead ancestors had given her this knowledge. It’s something that Maria Cristina herself doesn’t believe because she’s a Jehovah’s Witness, but she respects it.

She also saw this kind of hairstyle among members of the National Folkloric Group. Delia Montalvo, “Hairdresser of the Stars”, had styled their hair. Delia said that she had been taught by an Angolan woman, but this woman said that she could never do the braids the same, although she could copy hairstyles.

And, even though Maria Cristina loves these traditional hairstyles, she could only have it done once, by a young African woman. “It was so tight that I had to take it out that night.”

Maria Cristina Eduardo has also been an editor at the Gente Nueva and Abril publishing houses, as well as of publications by the Fernando Ortiz Foundation.

Activities of “Lo Llevamos Rizo” will take place during April. The competition’s award ceremony will be held on May 11th, as part of the Havana Biennial.