She hasn’t been canonized by the Catholic Church, she doesn’t appear in any book of saints, she isn’t recognized by any religious institution, but she is what we could call “a popular saint” because many Cubans (and foreigners) who have visited her grave are convinced that Amelia Goyri is a miracle-maker, 117 years after her death in the early 20th century.

By Richard Potts  (Photos by the author)

HAVANA TIMES – “I’ve been working here for over 30 years and not a day has passed, practically, that someone doesn’t come to pray to la Milagrosa,” Antonio says, an employee at the Colon Cemetery in Havana.

The old worker lays his wheelbarrow down on the ground, wipes the sweat off his brow and carries on: “Can you see all these small plaques? There are dozens, hundreds of them. The grave is completely surrounded by them and because there isn’t any space left, people place them in surrounding areas. They have all been brought by people who are grateful and have asked La Milagrosa to help heal their loved ones, especially mothers coming to pray for their children. I have seen visitors come from many countries in Latin America, the United States, Europe and even Australia.”

Under the blazing sun, I bent down in front of Amelia’s grave and read some of the phrases on a large plaque that has been placed on the side: “You were blessed Amelia/ without a doubt, by the Lord/ for all the love/ you felt when you were alive,” the first verse of this poem in marble, called “Eternal Gratitude”, reads.

“Word has it that this plaque was placed by a historian and missionary called Maria Antonia Ruiz,” Antonio explains. “Apparently she was like a vegetable in 1994, with severe health problems. But believe it or not, people prayed to La Milagrosa and this woman got better. Ever since then, she comes to the cemetery quite regularly.”

“Most people come in May, on Mother’s Day, nearly always women, and the grave is covered in flowers and bouquets,” he continues. “People even leave baby clothes, feeding bottles, toys and money. Then they are collected by a person who takes them to the Santa Teresa congregation, for charity.

And can you believe it, Mr. Journalist? Not a single offering has been lost! Nobody touches what people leave for La Milagrosa,” Antonio finishes by saying, almost with reverent fear.

I read some of the messages: “Thank you Milagrosa for granting my daughter Yaima with the gift of being a mother, from her Argentinian grandmother.” “Infinite thanks from Chile, our son is growing happily and healthily…” The list would be never-ending.

I reflect on the fact that gratitude really is what hangs in the air around the grave, in the hundreds of small plaques that people have been placing around it over the years, thankful supplicants of all nationalities, some of whom have traveled to Havana just because of Amelia’s legend, needing to ask for her help for a relative going through a difficult existential or health crisis.

But, who was Amelia and why have so many people turned to her to confess their grief and ask her for solutions? The story (the details of which have already been confused with legend) begins in the late 19th century, in a house in San Cristobal de la Habana…

The Story and Legend 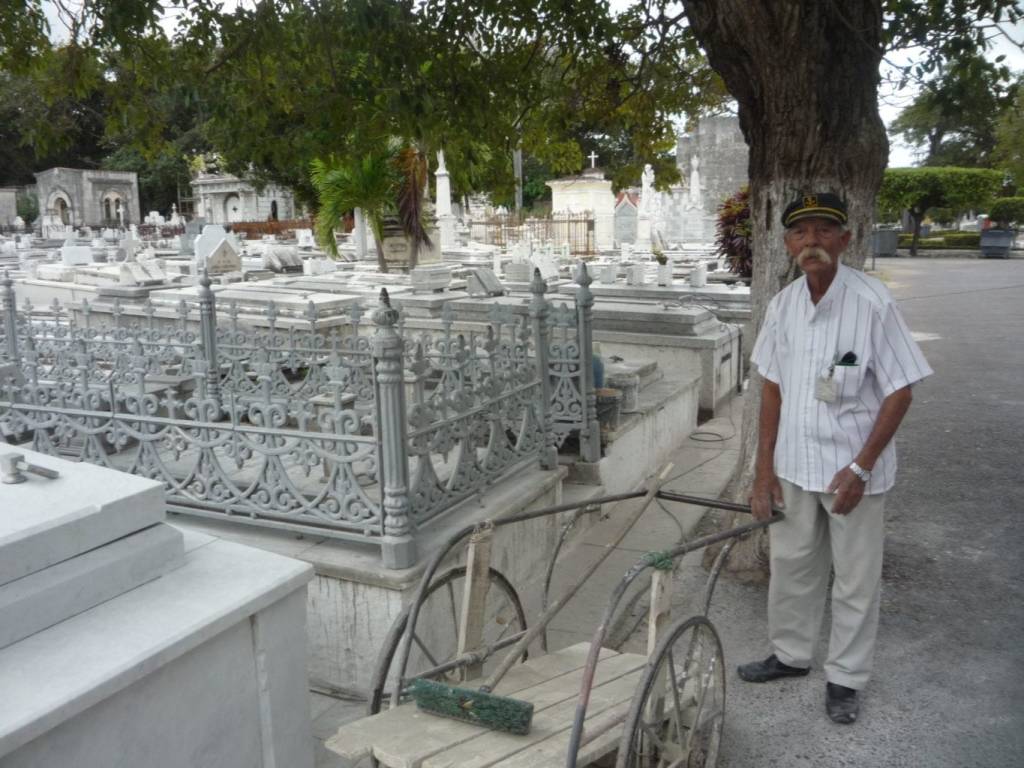 Amelia’s story is a tragic love story which has become legend over time and as a result of some extraordinary events. Amelia Francisca de Sales Adelaida Ramona Goyri y de la Hoz was born on January 29th 1877 into a wealthy family in Havana, of Spanish origin, and she was baptized on Sunday March 4th 1877, at the Santo Angel Custodio Parish Church. She spent her childhood with her aunt the Marchioness of Balboa’s palace, on Egido Street in Old Havana, which was within the city’s walls back then.

According to her most loyal historian, Maria Antonia Ruiz, Amelia fell in love at 13 years old with her second cousin Jose Vicente Adott, but her family opposed their union outright because the alleged fiancé couldn’t ensure a comfortable future for their daughter.

Years later, when the 1895 Independence War began, Jose Vicente left for the jungle to fight for Cuba’s freedom. He returned three years later, now a captain of the Liberation Army and he decided to ask for the young woman’s hand in marriage, who he had loved ever since he was a boy. By this time, Amelia’s mother had passed away, as had her uncle the Marquess of Balboa and her father was very sick and had no other choice but to accept.

They got married on June 25th 1900 and Amelia fell pregnant soon after. On May 3rd 1901, she suffered from eclampsia in the eight month of gestation. Medical science at that time couldn’t save her and she passed away, as did her child. She was 24 years old.

Amelia was buried in a modest vault at Colon Cemetery, as her husband refused for her to be buried in the Marquesses of Balboa’s vault. However, she was buried in a luxurious bronze coffin, with her daughter placed between her legs, which was a Spanish custom back then, according to chronicles of the time. Since then, people say that her husband, overcome with grief, used to visit her grave every day, dressed in mourning clothes, to “talk” to Amelia. Nobody knows what it was exactly that he used to say to her in these “conversations”, but Antonio claims that some former employees, who are retired now, used to hear him sometimes say “Wake up, my love.”

The statue and the cross

Jose Vicente’s sad story reached his friend, the Cuban artist Jose Vilalta Saavedra, one of the greatest sculptors of his time, the author of the monument at the top of the cemetery’s entrance, the monument to Jose Marti in Central Park, the monument to the eight medical students, the monumento to Francisco Albear in the square that shares his name and many other works.

When he heard what had happened, Vilalta offered to create a statue of Amelia. The artist was in Italy at the time so he asked her husband to send him a photo and he chiseled her features into Carrara marble. He then brought the statue over to Cuba, in person, in 1909. This is the sculpture that now decorates her grave, which depicts a young woman who is looking above with the allusive attributes of Faith and Charity, carrying a child in one arm and holding a cross in the other.

The cross holds great significance because Amelia passed away on May 3rd, the Day of the Holy Cross, according to Catholics. After the sculpture was positioned, Jose Vicente, who continued to visit the grave every day and made a new ritual: he would withdraw slowly when he would have to leave, never turning his back to it. This is why believers still do the same today after making their plea to Amelia.

Years passed and in 1914, when Amelia had already been dead for 13 years, Jose Vicente’s father passed away and Jose Vicente decided to bury him in the same plot as Amelia. People then say that, to everyone’s great surprise, including Jose Vicente’s, both bodies were found intact and Amelia was hugging the child in her arms.

After that happened, the coffin was covered again and has never been reopened, but news spread across the entire country. Ever since then, this love history has elements of myth, legend, reality, fantasy and spirituality. After this strange event, rumor began to give the sculpture supernatural powers, as the guardian of pregnant women, children and mothers.

In 1928, Fernando Ortiz, the great researcher of Cuban folklore, wrote a chronicle about the “Colon Cemetery’s Miracle-Maker” and he tells the story about how a passed-out woman gave birth between Amelia’s grave and the grave of her sister.

Nobody knows who the first mother was to go and pray for her child’s health there, but ever since then, Amelia became “La Milagrosa” (The Miracle-Maker), guardian of future mothers and children, who go to her and pray for her miracles. A popular cult came into being and it still exists, as strong as ever. Thousands of people come to visit her every year at her eternal resting place looking for a much-desired miracle, as the flowers piled up around the grave bear witness to, as do the gravestones with thankful messages and there are even people who have gone to the Catholic Church to ask for her to be canonized.

Today, the legend of La Milagrosa is revered in Cuba and in many other Latin American countries, and even people from Europe and China come asking for her grave, according to guards at Colon Cemetery. 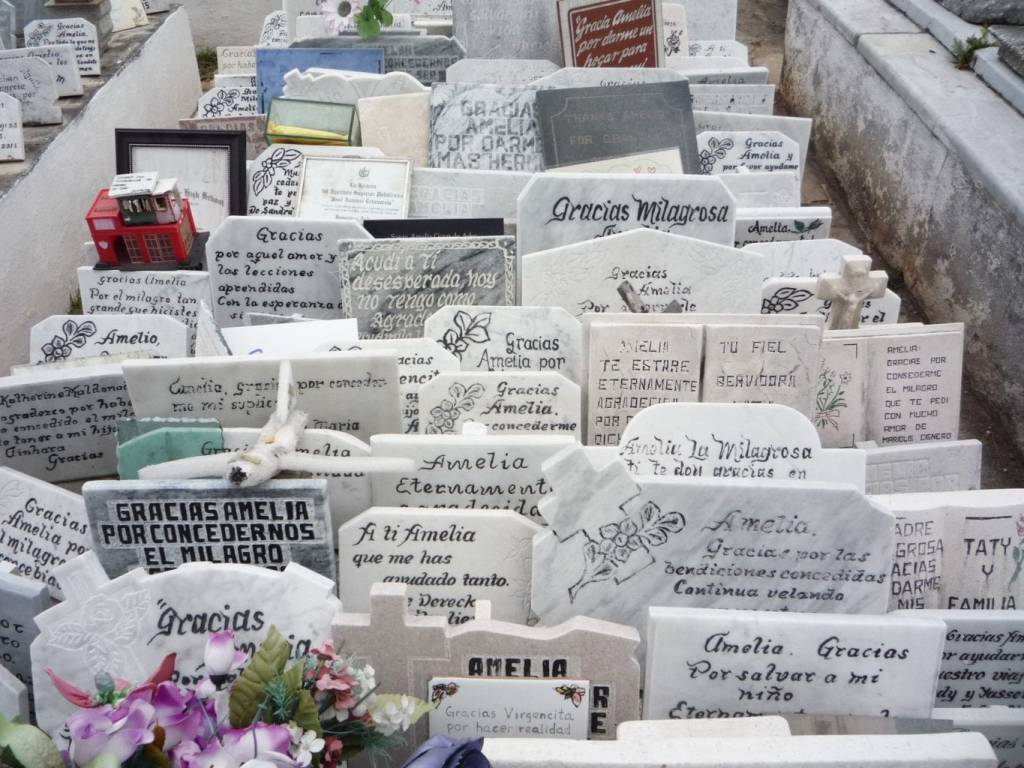 Hundreds of visitors come every year to pay her tribute, to ask her for a miracle or to thank her for the miracles she has supposedly already made. Her grave is the most beloved, popular and respected in the cemetery.

She has become famous over the years for granting miracles to many people, mainly mothers who come to her as a last resort, looking for protection or health for their children, or to ask her for the chance to be able to fall pregnant. There are always flowers on this simple and modest vault and people who go to pray or to respectfully see the famous dead figure.

The thing is that, canonized or not, Amelia is a popular saint and this is where the charm of her legend lies. It isn’t governed by any institution, political or religious. So let’s leave the skeptics to their skepticism and believers to their beliefs, but Amelia will continue where she is, clinging to her cross and holding her child in her arms, receiving visitors with her serene marble stare. Like Maria Antonia Ruiz’s poem says: “Let God continue to guide you on your path with light, so that you can continue to help us in our own paths, let God continue to give you his enormous kindness, feed your spirit and you will forever be, Amelia La Milagrosa.”