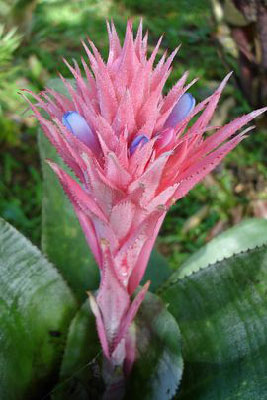 HAVANA TIMES — While in Cuba there are a considerable number of endemic bromeliads, many others have been introduced for lovers of ornamental plants. Most people do not know the name of this family that includes pineapple and curujeyes as the most popular of this group of monocots.

The pineapple is well known because it is one of the most successful fruits worldwide for its flavor and wonderful perfume, the curujeyes attract much attention for living on trees, they also grow throughout Cuba on rocks or directly in soil.

In many parts of the world they are highly valued for their leaves and showy flowers for their shape and bright colors. They are sold at high prices in Europe, where they are considered exotic and their cultivation is more difficult.

Together with orchids, bromeliads form a very diverse and interesting group of beautiful plants; most require high humidity and warm temperatures.

Here in Cuba they are little used by lovers of gardening. In a few cases they are collected more for the beauty of the leaves, not so much the flowers, as is the case of one variety called women’s nail for having the tips of the leaves red. 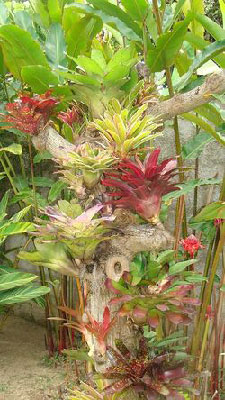 There are species that are both beautiful and easy to grow by not requiring in most cases any substrate. You only need to tie them tightly with a copper wire to a dry branch and that’s it.

They prefer the open and have the ability to collect rainwater from their leaves in tight spirals as a reserve for times of drought.

The species that possess small leaves obtain water directly through the absorption by the villus and trichomes on the surface of the leaves and retain the liquid for a longer time.

That is the case of the world’s smallest bromeliad (Tillandsia usneoides), well known by collectors because it forms vegetative colonies that hang from the branches of trees.

But more interesting still is a bromeliad that grows in the high Andes mountains and is the largest of all those in the world. This plant reaches four meters in size with leaves similar to henequen or maguey and to top off its extreme characteristics it possesses the world’s largest inflorescence, reaching ten meters of growth above the four meter plant.

Its common name is Titanca and scientific (Puya raimondii). The inflorescence produces up to eight thousand flowers producing six million seeds that mean the end of its life span of about a hundred years. By producing the puja seeds the plant dies.