The cartoonist was recognized with the 2019 Maria Moors Cabot Award. He spoke on the important role of humor in coping with the crisis in Nicaragua.

HAVANA TIMES – Nicaraguan cartoonist Pedro Molina has been recognized with the Maria Moors Cabot Prize from New York’s Columbia University, one of the most prestigious recognitions in world journalism. He states that he feels nervous, honored, grateful, but above all motivated to continue making people laugh and reflect with his drawings.

His plan for now is to “continue drawing and trying to do it in the best way possible.” Molina, born in Esteli in the north of Nicaragua, sees his career as “a daily challenge”, because every day could be the day he draws his best cartoon yet … or the worst. “The public is very demanding: one day, they love and adore you because they believe you did your best work; but the next day one of your drawings offends them, and they judge your entire career for that. It’s reality – unjust, but that’s the way it is,” he affirms.

Columbia University described the cartoonist who publishes regularly in Confidencial as an avid observer with “extraordinary artistic talent” who with his ingenious humor “is an authentic example of speaking truth to power.”

“Public figures in Nicaragua and abroad have felt the bite of his cartoons, which are published in media around the world.,” the jury statement read. 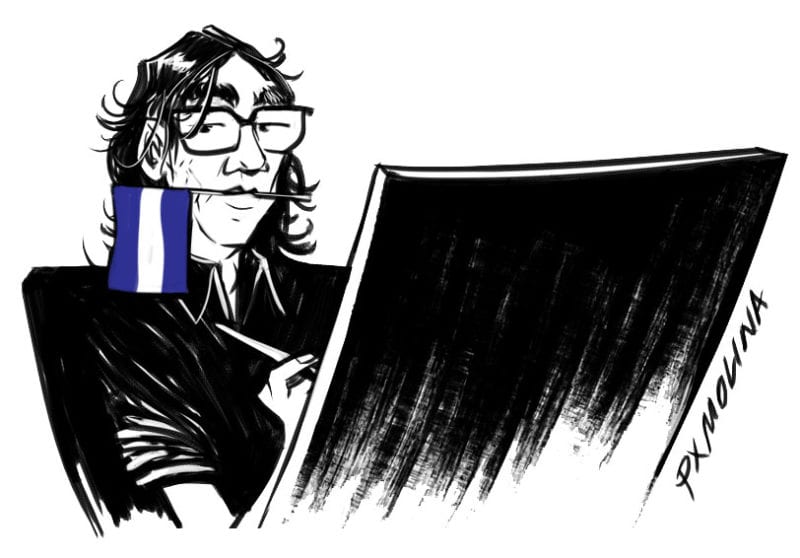 Bringing the powerful down to earth

The cartoonist, whose pen name is PxMolina, commented in an interview on the internet news program Esta Semana that the role of humor is to be “anti-power”.

In addition, he maintained: “We’re living through some ridiculous moments for humanity,” because there are people “who in the name of political correctness feel that they have the sacred right to feel offended by absolutely everything,” without knowing the context, the humor, or understanding that cartoons are often created to make fun of specific situations.

Molina denounced that he has been the victim of direct threats from fanatics of the Ortega-Murillo regime, a situation, he noted, that dozens of independent Nicaraguan journalists also suffer. However, he insists that they won’t silence him.

The cartoonist indicated that sometimes reality itself in the country is so unbelievable that it ends up being funny, and competes with his own “scribbles”, as he calls his drawings.

“You just have to look at Rosario Murillo’s monologues… the things she says make people angry, but they also poke fun at how she insults us while calling herself Christian, saying that they profess love while they continue killing people.  Despite the horror of the situation, people also see the humorous side,” he commented.

Molina noted with pleasure that the civic rebellion begun on April 18, 2018 has awakened many people’s desire to express themselves. Many new illustrators have come forward, and there’s been a spike in the public’s appreciation for humor with the many memes that inundate the social networks.

Molina was the third Nicaraguan to be decorated with this award, the oldest international prize for journalism. The Cabot prize has been awarded to over 300 outstanding journalists from the United States, Latin America and Europe.

The Moors Cabot prizes were begun in 1938, to be awarded to journalists who promote a better understanding of the Americas.  Previously, the prize had been earned by two Nicaraguans: in 1977, it was given to journalist Pedro Joaquin Chamorro Cardenal, editor and director of the newspaper La Prensa who was murdered in 1978; and in 2010 it was won by his son, Carlos Fernando Chamorro Barrios, director of Confidencial.

Molina is only the seventh cartoonist to ever receive the prize. The jury stated: “Molina uses his pen and wit to take aim not only at the repressive government of President Daniel Ortega, but also at human rights abuses throughout the Americas and the world.”

According to the cartoonist, it’s a true recognition to receive a prize that “has been won by giants that one admires and respects”. Among the six other cartoonists who have previously won this honor are the Uruguayan-born Argentine national Hermenegildo Sabat (1988) and the likewise Argentine Juan Carlos Colombres, better known by his pseudonym Landru (1971).

Molina took advantage of the opportunity to thank and congratulate the jury at Columbia University for giving the profession of caricaturist the importance it deserves.  The profession, in his view, is endangered by editors who are “fanatics of political correctness and fearful of the digital lynch mobs”.

He recalled that he began to draw at the end of 1997 and beginning of 1998, and that the three national figures who inspired him were Roger Sanchez, Alberto Mora “Amo”, and Manuel Guillen.