The president, flying the flag of socialism, has now succeeded in extending his rule, which began in 1999. His goal is to remain in power for a total of 20 years.

Venezuela is Cuba’s leading trade partner, providing it with all its imported oil in exchange for the services of tens of thousands of professionals in the fields of health, education, sports, etc. Chávez considers Cuba’s Fidel Castro as his leading political mentor.

After learning of his victory, Chavez spoke from the side window of the Miraflores presidential palace (the “balcony of the people”) saying that with his victory Venezuela will continue moving toward “democratic socialism of the 21st century.”

Chavez said he won in 20 of the country’s 24 regions, while two more were being contested at that time. At the same time he highlighted the attitude of the opposition in accepting the results.

“We recognize the 30 million Venezuelans who allowed the rebirth of this country, this land of Simon Bolivar. This has been a memorable day, marked by the democratic spirit of all and with a high 80-percent rate of participation (of registered voters),” he said.

Chavez congratulated the opposition leadership for recognizing the “true victory of the people.” He added, “The candidate of the right and his campaign headquarters just announced to the country that they have recognized the Bolivarian victory. This is a very important step in building peace in Venezuela, for all of us to get along,” noted Chavez, who also invited his opponents to enter into dialogue.

Chavez said this latest victory was also one for the peoples of Latin America, Caribbean and Central America.

“Venezuela will never return to neoliberalism, it will continue moving toward the socialism of the 21st century, democratic (socialism). Therefore thank go to God and to my beloved people, thanks go to everyone,” he stressed.

Prior to that, Capriles recognized Chavez’s victory and emphasized that “what the people say is sacred.” He added that the more than six million who gave him their vote “should not feel alone.” 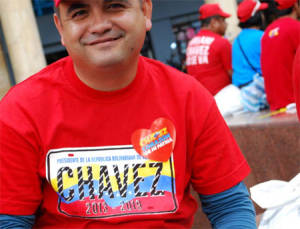 Capriles, who was the standard bearer of the opposition after winning the primaries this past February, said that Chavez should recognize that almost half of the country is against his “project.”

“With a project that’s 14 years old, he knows that almost half of the country doesn’t agree with that alternative. From the winning candidate I ask for respect, consideration and recognition of nearly half of the country,” he said.

Capriles said he is part of a new leadership in the country and urged his supporters not to feel defeated or fall into “radicalism.”

After a quiet election day, the president of the CNE said yesterday’s turnout was the highest in recent decades, with 80.9 per cent of eligible voters going to the polls.

“We must again stress the civic and democratic behavior of the people of Venezuela. We have written a brilliant page in Venezuelan democracy,” said Lucena in announcing the results.

Just after that announcement, Chavez supporters took to the streets to celebrate with caravans of cars, flags and fireworks.