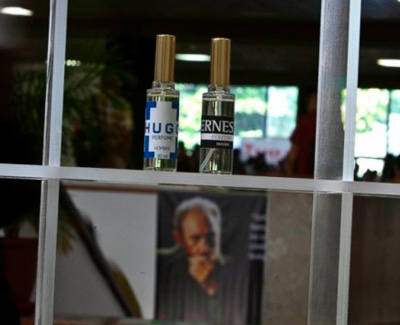 HAVANA TIMES — The Associated Press published a news item on Thursday that has made many sit up and take notice in Cuba and abroad. “It can’t be true,” a Facebook user immediately gasped.

Cubans of any political creed have been startled by the news that the state-owned company Labiofam has launched two new colognes made in Cuba.

What’s curious about the news, which has had broad repercussion in the international media and none (so far) in the Cuban media, is that these new fragrances are labeled “Ernesto,” for Che Guevara, and “Hugo,” for Hugo Chávez.

“They will be very attractive colognes, but the name also means a lot to us,” said Isbel González, vice president of research and development for Labiofam, the largest Cuban enterprise engaged in the production of natural compounds for medical, alimentary and cosmetic use.

And because any play on symbols also involves a symbolic act, interpretations have not been far behind. The most diverse reactions among people who have heard the news range from sarcasm to consternation, from mockery to ire. Most discussions in the social networks focus on interpreting the ideological charge of this commercial decision.

In Cuba, it is not unheard of to use the reputation of some personalities to promote products. For decades, the Alicia Alonso line of cosmetics has been on the market, created with the blessing of the Prima Ballerina Assoluta in the full use of her faculties.

There is also a Vegas Robaina cigar vitola [band], which honors one of the most important tobacco producers in Cuba.

But, faced with the creation of “Ernesto” and “Hugo,” many have pointed out that ballet has a lot more in common with ornaments and perfumery than the two political figures linked so essentially with the history in different periods of the Cuban Revolution.

The images of Che Guevara and Hugo Chávez, two undeniable and mythical leaders of popular causes, no longer living, are subjected constantly to campaigns of defamation and trivialization in the media with an enormous capacity to influence the contemporary world.

Which is, then, the reason for this unprecedented marketing move in a Cuba that continues to call itself socialist? Is it simply the initiative of a group of entrepreneurs chasing after profits?

If that’s the case, are we to interpret that these decision makers no longer feel the same scruples that only a few years ago produced widespread debate and criticism of the commercial use of those very same symbols?

“It’s all over,” wrote a Facebook user this morning, after reading the item, written by the AP’s correspondent in Cuba, Andrea Rodríguez. It is a wide open statement that carries many meanings.

A Panamanian user commented on Facebook: “In Panama, they launched [a perfume] called ‘Canal.’ We ignored it. The Canal has been the source of struggle for generations. That fragrance suggested blood, sweat and tears. I hope that Cuba isn’t led down some wrong economic path.”

Without any apparent ethical conflict, the biochemist at Labiofam who led the perfume-design team explained that “we didn’t want to create propaganda but to pay [Guevara and Chávez] homage and help to make their names endure.” That’s a questionable favor, if you consider that they chose a most untraditional format to render that tribute.

Most Cubans will not hear of this debate because of the scant access to sources of information such as the Internet or other communications media. And if everything follows its course, several weeks will go by before those colognes are exported or sold in the hard-currency retail stores in the elegant vials dreamt up by the Labiofam entrepreneurs.

When the moment comes that “Ernesto” and “Hugo” appear in the stores’ window displays, many Cuban citizens will interpret it as “normal” a commercial action that pursues hard-currency revenues with an efficiency that conceals questionable social values.

It is likely that, under such conditions, faced with the new consensus, only a few will demand to know what are the ethical limits that the State will impose on the economic actors conducting their marketing. But, just as likely, they won’t get a clear answer.

Church of the Good Voyage, Villa Clara, Cuba – Photo of the Day