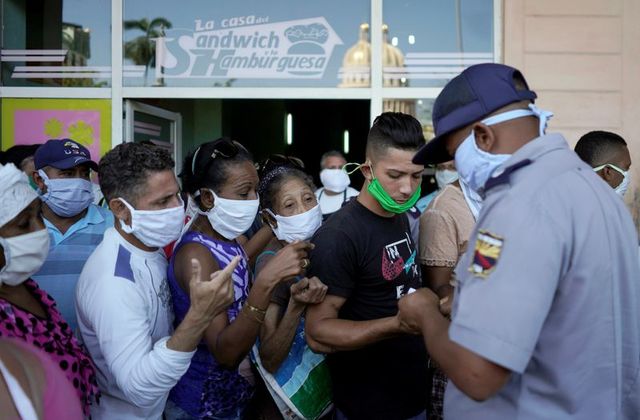 HAVANA TIMES – According to experts on Cuban national television, the authorities are beginning to evaluate declaring the “endemic phase” on the Island, which occurs when the disease is a regular presence in certain territories or population groups.

This step implies the careful and cautious relaxation of measures with respect to quarantines in place so far, but also the assumption of continuation of sanitary protocols that will permanently govern life in public spaces to avoid a new wave of coronavirus. In the words of President Miguel Díaz-Canel, the “postcovid” recovery strategy will not be applied until there is certainty that the disease is controlled.

It is therefore striking to note that new cases were reported in Havana, a province located in the epicenter of the Island’s infections, in the past few days. An area that has reported 1,090 confirmed cases.

In fact, experts project that Havana will continue to report active cases until the first fortnight in July. Dr. Francisco Duran, head of epidemiology at the Ministry of Public Health, blames the area’s highly concentrated population, the intense economic activity and dynamics of life typical of this city where control measures have been relaxed, such as the use of masks and the use of disinfectants when entering places like food markets, and where supplies are scarce.

At the beginning of May, in Havana’s most populated municipality, Centro Habana, and also in Old Havana, isolation measures were increased, including the imposition of severe sanctions on those who remained on the streets unjustifiably and did not comply with the rules meant to protect them. The problem, as many have opined on social media, is the constant search for food and toiletries. As in most of the rest of the country, food prices in the capital have risen rapidly, the already existing shortage has been accentuated, and the numerous home delivery services are not within the economic possibilities of most.

Also in May, Cuba appeared, along with Ecuador, El Salvador, Guatemala, Haiti, Honduras and Nicaragua (among others), in a list published by the United Nations World Food Program of countries in Latin America and the Caribbean experiencing hunger and with estimates of a greater number of people pushed into this situation due to the negative economic impact of COVID-19.

On April 24, peak day of the disease in the country with 1,337 confirmed cases in general and 52 only on that day, the Centro Habana municipality became the highest risk area in the city. More than a month later, that territory continues to head the list of the highest number of infections and irregularities.

Since May 5, the Ministry of Public Health began a study of the seroprevalence (presence of antibodies) and the prevalence of COVID-19 in Cuba. So far more than 4,000 people have been selected for clinical, biological and demographic research, and whose results should provide a better screening tool for the detection of the virus.

There is encouraging news — at least as of May 20. That a week had passed without registering a death in the country due to this disease. The news contributed to the perception of a decrease in risk for the population and in the functioning of the institutions.

The effort of the majority of citizens and government institutions to contain the Coronavirus has been mostly praise-worthy, even without comparison to any other country. Guaranteed wages for workers and the tax exemptions were again postponed, now for the month of June. The country works to equally distribute its few productive reserves, but it is not difficult to realize that they are not enough.

Despite the willingness and the measures indicated, on May 19, the first case of an outbreak of the contagion occurred in the La Época store, located in the Centro Habana municipality. From that case two more were later reported, one in a medical lab (AICA Labs) and the other in the transportation center of the Ministry of Internal Trade. On June 1, mention was made on the Round Table TV program of how some have relaxed sanitary measures taken in businesses and government institutions, many who have started working without permission. This seems to have reversed the downward trend of contagion in Havana.

The capital, according to the newspaper Tribuna de La Habana, is practically the only province where transmission exists with a high prevalence of asymptomatic persons. Luis Antonio Torres Iríbar, president of the city’s Provincial Defense Council, said the province is in regression and must take more extreme measures and work toward greater responsibility.

Colonel Frank Gimen Jiménez, head of the capital’s National Revolutionary Police, said measures will be taken against those who do not use masks, drink alcoholic beverages in public spaces, taxi drivers who transport people in their vehicles without authorization, and those who remain on the streets, especially persons in age groups most at risk, or who are more vulnerable to the disease.

Given the country’s urgent need to resume economic activities that produce sources of income, there are rumors of a soon to be opening of the borders and the restart of tourist activity on the Island in June. The Ministry of Tourism reported on national television that this will not be so until approved by the government, so no dates have been set. They are carefully monitoring how the disease progresses in the country. According to Cuban Customs, current air operations are currently limited to receiving Cubans stranded abroad, who, before returning to their homes, are quarantined for 14 days in facilities prepared for this purpose. They are also processing those returning from humanitarian aid missions abroad.

As we finished writing this report on Tuesday, 15 new cases of coronavirus had been confirmed, for a total of 2,107 in the country. Of these 15, all are from Havana and 13 correspond to the incident that occurred in the aforementioned AICA Laboratories.