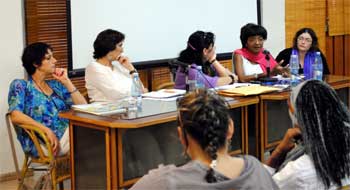 HAVANA TIMES, April 2 – On the second Thursday of each month there is a debate on gender and culture in Cuba, with a suggestive title that invites questioning. “Mirar desde la sospecha” (Looking with suspicion) is a chance to rethink patterns, labels and terms established by centuries of patriarchy.

At its’ March session, the theme was Creators and employment: the art of conciliation, in which a group of creative women presented their life stories, explaining their strategies for combining creative and domestic work, professional performance and the family.

The panel was made up by filmmakers Marilyn Solaya and Magda Gonzalez Grau, Teresa Lara, researcher and demographer, and author Laidi Fernandez Laidi, with Danae C. Dieguez as moderator.

According to Lara, the family is where the greatest gender inequalities are found. Several studies have shown that women work more than men, spending more than half of their time working. 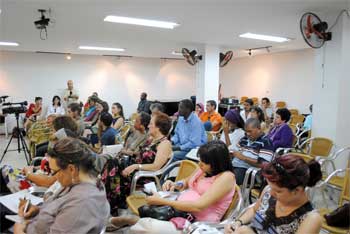 In general, men always spend less time on domestic work and unpaid care since they are engaged in other activities.

The researcher noted that from national and international studies we can deduce that female artists are no exception to this dynamic, have the same domestic burden as other women, even if they do creative work at home.

She added: “50 percent of the world’s population are women and carry the burden of the other 50 percent,” while suggesting, “Reconciliation is needed; the political will exists to guarantee that women enter the public sphere, however home. ”

For Teresa Lara, woman is fragmented, is not the same woman when she gets home, postpones her desires, her need for satisfaction for the wellbeing of the family.

NOT THE SLIGHTEST AWARENESS

Filmmaker Magda Gonzalez Grau was a director for many years and participated in decision-making in the country’s cultural policy. She believes that public policy in Cuba does not take into account the starting point of creative women. 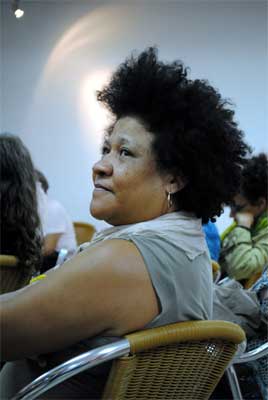 “It is very complex: the equity that the revolution sought to achieve by putting women at the forefront of every battle, placing the woman alongside the man, was seen in a very simplistic way. They did not relieve us of the housework and the children, and gave us responsibility for work,” said Gonzalez.

The filmmaker said she could not achieve this balance because “there is the not slightest awareness of the fact that women have a different work day” and are sometimes caught in the dilemma: cook or work.

When she gave up as a director she regretted neglecting priorities. “Alhough there are laws that favor women, institutional support is lacking. For example now the law gives the creative woman the right to maternity leave. There are no problems with the legislation, but in the implementation of it.”

Speaking from experience, writer Laidi Fernandez de Juan said: “I didn’t realize how interesting the subject of domestic life is until they began to ask questions. Responsibility comes first on my list of values. I get up to 5 am, but that’s to put the peas in the pot. ”

Laidi also works as a doctor, a very demanding profession and said she was not willing to skimp on the time needed for her children to do creative work. She referred to the “sandwich age” (that she is in at the moment) when the woman is dedicated to childcare and looking after her parents, “a highly debilitating condition that society imposes on us, and one we assume.”

And she said: “I find no conciliation.” She gets nourished by the constant activity surrounding her and when she sits down to write she does so at the expense of sleep. She is convinced that “I would create better literature if I had more time.” She has no plans to write another novel, and considers herself a writer of short stories for the time being. 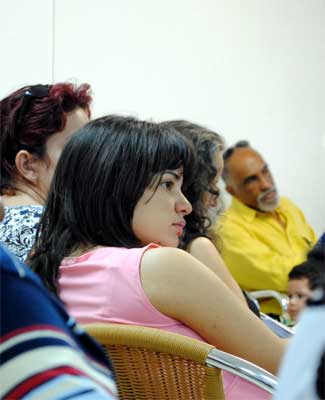 Marilyn Solaya, director of the documentary : En el sexo equivocado (The Wrong Sex), says she does not know how she manages to combine things, it is pure magic. She has a 9-year-old girl and a boy of 6, lives alone in Havana, her family lives in another province.

As looking after the children takes up most of her time and mental energy during the day, she has to work at night. Still, she has found a “strange mechanism” to do her housework and think about her film project at the same time.

She soon realized that cinema, children and husband are incompatible and decided that something was superfluous. “My children come first and the cinema is my passion.” Marilyn is the breadwinner at home, since 2008 she has been working for the Cuban Film Institute (ICAIC) and is not paid a fixed salary.

She says “no one thinks that a woman living alone needs help.” The filmmaker believes the state should consider that the alimony provided by fathers is insufficient; no child gets the basic necessities with that amount of money.

“The institutional support that women get today is obsolete. It played an important role when the revolution triumphed, but today the reality is different. ”

The craft of filmmaking is mostly in male hands and she had to enter under those rules. “A male director can afford the luxury of not asking for a salary because when he gets paid, he gets paid well and can manage the money and live,” Marilyn says.

She really enjoys her children, her life, “Until we get paid for all the work we do there is nothing that can be done. I do not believe there is a will to pay us for all the effort we put in.” 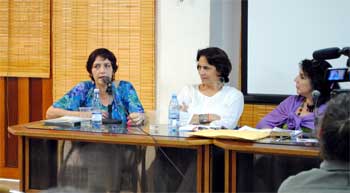 The audience posed questions to the panelists and there were suggestions and approval for the choice of the subject.

Some comments revolved around the term reconciliation which actually conditions domestic roles: if it is necessary to reconcile, the woman has to continue with the burden of the family. Psychologist Lourdes Fernandez proposed a shift of focus to the term of co-responsibility and expressed concern about the costs both subjective, familial and social.

Most agreed that public budgets in Cuba do not have a gender focus, neither in Health nor Education or Culture. Budgets are made for everyone, there is equality, but there is no gender focus. And this was another point of convergence: the distance between equality and equity. 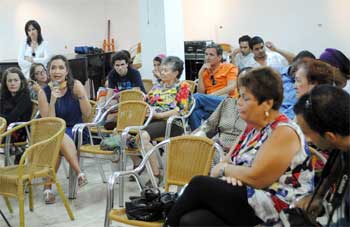 One of the coordinators of the meeting called attention to a currently hot topic, whether or not to stop subsidizing culture. Looking at the cuts now taking place in the economy, “What happens to women who already by definition have less access to the institutions and are less well paid? What would happen if the idea of economizing were applied to art and culture? ”

Despite the contrary stories of the participants, the emphasis on female stereotypes was noticeable in the hall, everyone made it clear sooner or later whether their homes were clean or if they liked ironing.

Although the venue has been designed for thinking about women from a female point of view, the guests are all women who excel in their careers, so the opinion of other females with less luck in that sense would benefit the dialogue, create a balance and prevent the discussion from becoming polarized. 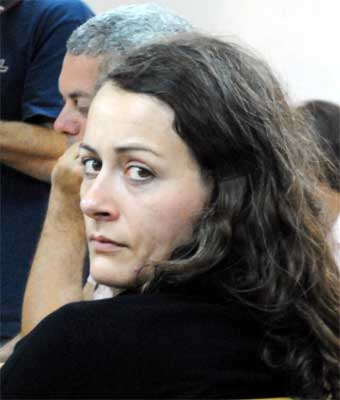 Also noticeable was the lack of a person unable (even if they wanted) to access the public sphere, having been totally occupied by domestic chores, or perhaps even a creative woman with no links with government institutions and with the burden of the family in tow .

Missing above all was the male view, and although there were no men on the panel the men in the audience kept their lips sealed.

The meeting called for a look at the needs of women, for the mothers who “are are the ones that guarantee social development”.

Reasseing the family as an important nucleus for the future, identifying responsibilities within it; supporting the idea that there should be special policies for women because, regardless of the question of talent, they are already at a disadvantage.

It was an opportunity to listen to scholars and try to think of culture from a gender perspective.
—–
The second Thursday of April, the topic will be New technologies and Feminism. The meeting is in the Villena hall of the Artists and Writers Association (UNEAC) (corner of 17th and M, Vedado), at 3.30 pm.