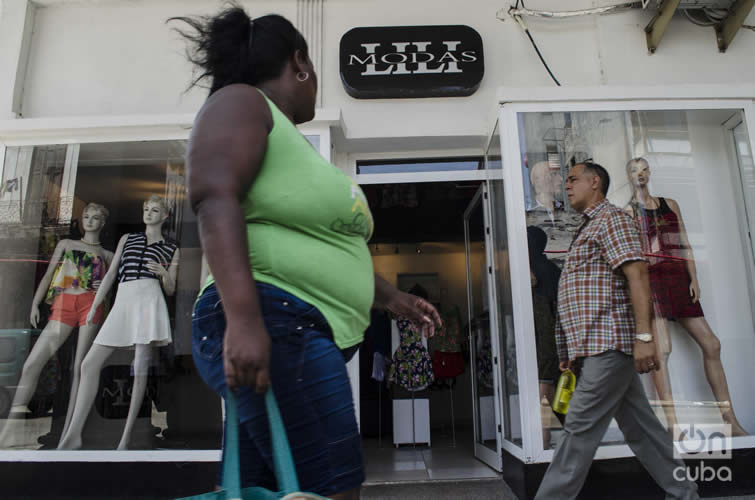 HAVANA TIMES — Nearly half of Cuba’s population carries more than a few extra pounds. The most recent study reports that 43 percent of the population is overweight or obese as a result of sedentary lifestyles, high intake of fat-rich foods, sugar and salt and low consumption of fruits and vegetables.

Because of the bad eating habits encouraged by parents and grandparents, ten percent of Cuban children today classify as “prematurely obese.”

Excess weight also increases the risk of cerebral and cardiovascular conditions, which have become the second and third most common causes of death on the island.

The 2011 “National Survey on Risk Factors and Activities that Prevent Non-Transmissible Diseases” conducted by the Ministry of Public Health revealed that Cubans ate fruits and vegetables only 3.2 days a week. It seems that the country’s ingrained nutritional habits are not helping. 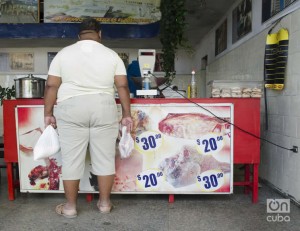 “You have to die of something!” says Orestes, reclining into a chair of his cafeteria.

“Ok, go ahead and die, but try and die in peace and without all of the complications that come with obesity,” Dr. Alberto Quirantes, an endocrinologist at the Salvador Allende hospital (formerly “La Covadonga”), replies when told about Orestes’ remark, a justification that is fairly widespread.

Quirantes is also a consultant professor and author of a health blog. His greatest merit, however, is to have worked for two decades at the helm of Cuba’s one “day hospital”, aimed at the treatment of obesity in the country.

Thanks to the explosion of cafeterias and fast-food stands that followed the re-authorization of self-employment in Cuba, one can come across fried snacks, pizzas and sweets of irresistible colors and smells at just about every street-corner in the country. The availability of these snacks and the sustained tendency of farm and livestock products to go up in price lead to a situation in which the majority of people opt to buy what is more accessible rather than what is healthier.

Ministry of Public Health documents (such as the above mentioned survey) explain the result of this: “The high price of fruits, fresh vegetables and other food products of high nutritional value place these beyond the reach of the lower-income sectors of the population. On the other hand, the food industry and domestic commerce favor a segmentation of the supply and tend to sell mass-produced products with higher fat and sugar contents and low nutritional value (…) In addition, these food products tend to produce a feeling of satiety, have an agreeable taste and are inexpensive, such that they are socially accepted and preferred by a considerable section of the population.”

“I invite all those who claim they cannot change their diet because fruits and vegetables are too expensive to make a list of all they spend in junk food in the course of a week, then to multiply this by the year’s 54 weeks. They’re going to be shocked!” Quirantes states, in contradiction to what the majority maintains. Quirantes is known among his patients in Havana for his thesis, claiming that one should change rather than take away people’s food.

“Traditional Cuban food – rice, beans, meat – is not healthy,” the endocrinologist insists. “The problem is people’s habits. Changing our diet is like changing our baseball team – it’s traumatic. But, if you’re shown the advantages of the new team, they may end up convincing you. We haven’t been able to change eating habits through teaching at schools, nor have we persuaded adults to do so.”

A HOSPITAL FOR “FATTIES”

Dr. Quirantes sees his patients at the day hospital in a “classroom” set up in the gymnasium of the endocrinology wing at La Cogandonga, a place he shares with his son Alberto Quirantes Jr.

Deliberately or not, the 30-square-meter locale lacks ventilation, and Quirantes makes everyone (including journalists following his class) sweat buckets while explaining the repercussions that “losing one’s figure” has on sexuality and health in general.

“When I got here, I had trouble walking because of my knees. I was feeling very down, sexually unmotivated,” Jackelin, vice-dean of a faculty for foreign students located in Cojimar, Havana, recalls. She is one of nearly twenty patients admitted to the hospital.

“One of my problems, the doctors told me, was that I wasn’t having breakfast,” she tells us. According to studies, nearly one third of the country’s adult population “skips” the day’s first meal.

“The food at my workplace is awful. I work with African students and we end up teaching them to eat like us. As of September, these kids stop seeing fruits at breakfast for, even though the markets are full of fruits, it’s very hard to get one’s hands on these through State channels,” the vice-dean explains.

Close by, Leriusky, employed by a tourism company, confesses she wasn’t eating anything in the morning either. “I weighed 175 pounds at one point. I’ve gone down to 148. My problem is that I’m very small. I wouldn’t have breakfast, I wouldn’t eat vegetables…I was in terrible shape.”

The two approached the day hospital in January, to start treatment (including general medical exams, lectures, physical exercise, localized therapy and long walks), next to twenty or so other patients.

In Cuba, obese individuals also have the option of undergoing bariatric surgery, an amputation of the stomach which can be carried out at several hospitals in the country – a procedure not all specialists recommend.

This clinic, rather, promotes a combination of healthy eating and physical exercise, as well as developing a spirit of self-care, motivating hundreds of people to run in the morning or afternoon or use private or State gyms, operating in nearly all of the country’s neighborhoods.

Jackelin has opted for this combination, having been infected with the enthusiasm of the vice-dean from Cojimar, who dropped 40 pounds after four months of treatment. Today, she feels more energetic, less tired, having begun to control a pre-diabetic condition that obesity caused her. She still has 60 pounds to go before reaching her ideal weight, but she feels she is much closer to achieving this than we she first started out.

24 thoughts on “Cuba: An Overweight Country”